Chandni Chowk – a major street in the walled city of Old Delhi, established by the Mughals over three centuries ago, is one of the oldest and busiest markets in all of North India. The region has retained its historical character amidst considerable urban challenges, and the narrow lanes are now almost always choked with congestion.

In the past few weeks, Chandni Chowk featured in the media twice. Once for being declared India’s most polluted residential area and more recently for seeing the launch of solar-powered cycle rickshaws in the capital city. A package to clean the busy Chandni Chowk area has also been declared and solar energy is clearly paving the way for this change!

What is interesting about Chandni Chowk is the fact that although tonnes of goods are traded here every day, the market itself has probably the smallest carbon footprint compared to any other market of a similar magnitude. For such is the situation here, that the only convenient way to transport goods (or people) is by pulling or pushing!

However, increasing congestion and heavy vehicular movement in the area has earned it the dubious distinction of being the ’most polluted residential area’ for NO2 and suspended particulate matter (SPM) pollutants, compared to 326 other Indian locations. Consciousness of this pollution has raised the alarm on the urgency to bring down the pollutant levels while also highlighting the region as a whole.

Perhaps for this reason, the Chief Minister of Delhi chose to launch Soleckshaw: the solar-powered cycle rickshaw at a function in Chandni Chowk last week. Also known as the “green rickshaw,” a soleckshaw weighs 210 Kg, runs at a speed of 15 to 20 Km per hour and can carry load up to 200 Kg. A solar battery of 36 volt, requiring 5 hours of charge, helps it run for up to 60 Km.

The Solekshaw has been built by India’s leading science laboratory and is now slated to be produced on a public-private partnership basis. Realizing the need to act on local issues other than climate change, especially to bring down the air pollution in the region, a Rs.100 crore (US$ 20.6 million) project to clean and beautify the busy Chandni Chowk was also announced at the function.

Public Lecture on the Lions of India 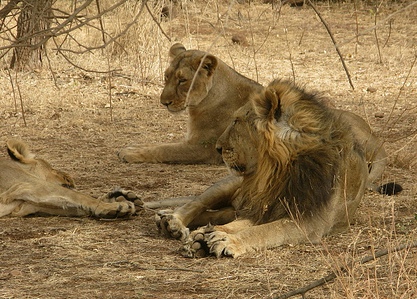