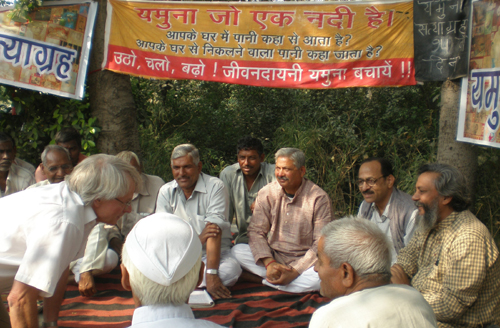 Even as environmentalists across the city raised massive hue and cry for saving the Yamuna river and its floodplain, and even as their concern was picked by several national and international media houses,  the “Court was simply not moved”. For in a judgement putting the legality of the construction of the Commonwealth Games village on the Yamuna floodplains under question, the Delhi High Court did not put a stay on the ongoing construction.

According to media reports, the Court maintained, “The environmentalists did not approach the court well in time to enable us to direct the respondents to undertake further studies or think of alternate site” and declaring things to have gone too far refused to stay the construction activity. This further reaffirms the faith in the Court, while also hinting that when in environmental doubt, the most sensible thing to do is to approach the Court – and sooner.

However, and if Natural Heritage First activist Diwan Singh is to be believed, the same logic was given by the then legal authorities to not put a stay on the construction of the Vasant Kunj Mall being constructed on the Delhi Ridge. In this case however still, the court has now appointed a four member committee, headed by Nobel laureate Dr. R.K. Pachauri who is also the Director-General of The Energy & Resources Institute (TERI), and the Chairman of the Inter-governmental Panel on Climate Change (IPCC). The committee is to carry out an assessment of the impact of the construction on the river bed before submitting a report within the next four months.

Everything now, right from the pride of the city, to its future is under stake. What we need to realize is that its neither the river nor the floodplain that is under threat. It is the people who live around it who would be impacted and it is your and my fate that hangs in the balance.