It took a radical fast-unto-death decision by a Professor, playing the religion-political card and much activism, that the Government of India has now accepted the fact – otherwise as crystal clear as should have been the water of the Ganges – that the holiest of holy River Ganga is polluted, the Ganga Action Plan has failed and that constructing dams upstream of the river is only making matters worse.

Earlier this year, pained by the unrelenting destruction of the Ganga river, Dr G. D. Agrawal, India’s pre-eminent scientist and a legendary Professor of Civil & Environmental Engineering at IIT-Kanpur went on a fast-unto-death to oppose the river’s continuing desecration.

His campaign was taken up by leader of the opposition party who called for stopping all dam constructions upstream of the river and the Government of India (GoI) was quick to commit itself to ensuring perennial environmental flows throughout the river while also informing Dr. Agarwal the same. Now, the GoI has gone a step ahead and declared Ganga a National River.

What is interesting here that a lof of efforts have already been made to clean the river and crores of rupees have already gone down the ‘drain’. All this, with no visible results and an even more polluted river. The challenges faced by Ganga in keeping itself clean are many. Not only are industries sprawling around its bank all along the stretch, urbanization and a rapid increase in population of towns and cities on its banks is adding more domestic sewage each day. The holiness of Ganga is also playing against it, as it is the river of choice for all religious activity thus implying more pollution.

In a high level meeting earlier this month, the Prime Minister of India set up the Ganga River Basin Authority as an empowered planning, implementing and monitoring authority for the Ganga River while talking about the special place river Ganga has in the hearts and minds of all Indians. He stated that this emotional link needs to be recognized and that the country should set up a model for river cleaning through the new institutional mechanism.

However, how effective is the authority in cutting across departments, ministries and state governments in an attempt to bring down the pollution load in the river, is something that only time will tell. The Ganga Action Plan (GAP) – a similar authority to clean the river failed miserably. Implementation is the biggest issue in India and in the industrial hub of Prof. G.D. Agarwal’s Kanpur city itself tanneries can be regularly seen contaminating the Ganga with chrome and chrome treatment plants set up by the Government lie unused.

Fri Nov 28 , 2008
Critical Mass is an event held in almost all major cities of the world, usually on the last Friday of every month, wherein a mass of cyclists ride through the streets of the city. The peak hour bicycle ride gives the subtle message to the motor-drivers, that cyclists exist too! The […] 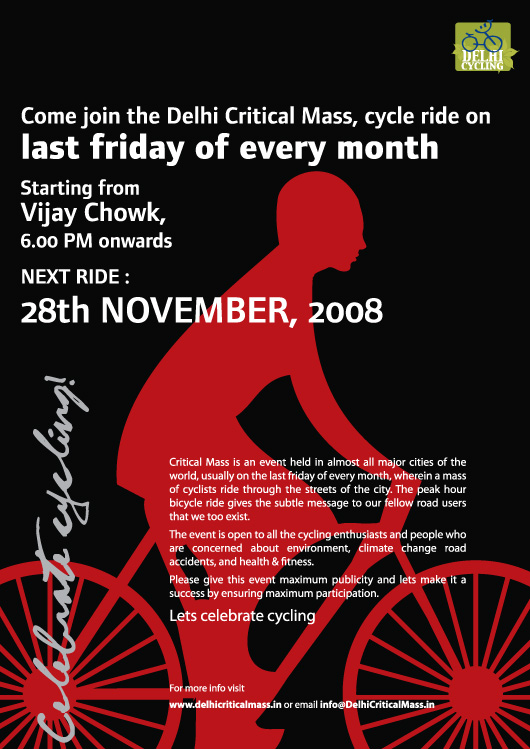