Just like everyone else, Dr. Palash Sen, lead singer of the famous HindRock band Euphoria, and a youth icon in himself was unaware of what the terrorists had in mind for Mumbai. He was all set to surprise the audience with what would have been the launch of India’s first green song, at the Live Earth event, that was scheduled to take place in Mumbai today, but was cancelled because of the terrorist attacks.

The Delhi Greens team met Palash Sen at the shooting of the video where he expressed shock at both what happened in Mumbai, and also on the current state of India’s environment, and the general apathy of people on different environmental issues.

Global Day of Climate Action at the University of Delhi

Sun Dec 7 , 2008
The University of Delhi marked 6th December, 2008 – the Global Day of (Climate) Action with speeches, plays, talks and a massive rally to spread awareness and demand action on climate change – especially from countries that can afford to, and are delaying not to by choice. The gathering saw some prominent faces […] 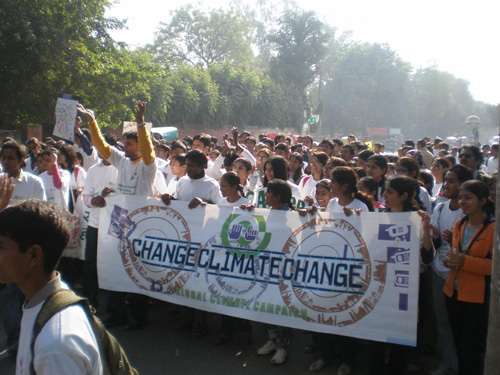