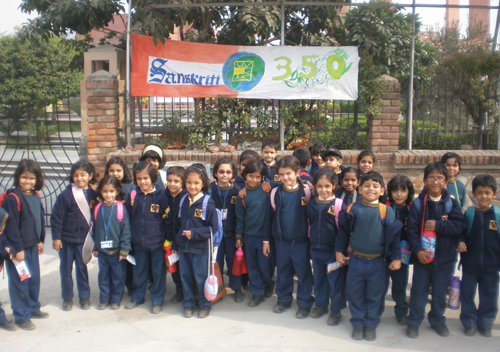 Established by the Civil Services Society in the Indian capital city of Delhi, Sanskriti has become one of the leading schools in the little over ten years of its establishment. The school recently won an award for its work with ragpickers and slum-children and has addressed its share of equity issues. Today, right in front of my eyes, Sanskriti School became another first.

The school called for ‘Sanskriti 350’ – an inter-school event inviting eco-clubs from over 30 schools, in a bid to highlight the importance of 350. Remarkably enough, Sanskriti (meaning culture) 350 was an event completely for the youth, by the youth and of the youth!

The youth event had everything from a green fashion show, a brainstorming session, green film competition, ad-mad, to a rock-band competition titled ‘the sounds of 350’! The event saw a good participation and was inaugurated by the Secretary, Environment in the Government of Delhi Mr. J.K. Dadoo – who elaborated on the science and policy of climate change. He also warned the students of a disease called ‘affluenza’ which, according to him, is a major threat to the global environment.

The enthusiasm of the young adults and the energy levels in them clearly suggested that the youth has understood the urgency to act today in order to ensure their survival, and the survival of their children and grandchildren on this Planet. It was most inspiring when the School Principal Mrs. Abha Sahgal took to stage and declared that her generation had clearly not done enough to protect our environment and that she is whole-heartedly with the youth – leading the green movement. 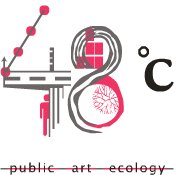 “Sanskriti 350” also saw participation from the Indian Youth Climate Network, Delhi Greens and the 48c Public.Art.Ecology Festival being celebrated in the city from 12th to 21st December, 2008.

5 thoughts on “Sanskriti 350, Sanskriti School Calls for an Eco-Clubs Unite Against Climate Change”

Wed Dec 17 , 2008
48c Public.Art.Ecology The Vulture Readings: Interaction and Reflections on Ecology and Extinctions. “It is true, we all seem to be going somewhere. Very fast, and quick. The question is where? All around us, there are extinctions, as things get blurred and we cannot see what we step on, all sacrificed […]