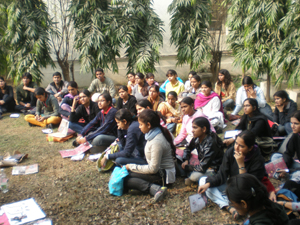 Being free in winter vacations, I thought of volunteering for 48°C – ‘Delhi’s First Public Art Ecology Festival’ (of which Delhi Greens was a partner) and had varied experiences which I penned down to share it here on the blog.

So to begin with I would like to talk of the orientation session I attended at the Rose Garden of DU’s Vice-Chancellor’s Office opposite the Kamla Nehru Ridge in North Campus. As volunteer manager, Ms. Vasudha Mehta started explaining about the festival till all the volunteers gathered, followed by the distribution of pamphlets – a passing by old man interrupted, “Ye calender dena bachon”.

Well, that was his perception and my first on record reaction of people about the festival, and we got over him saying “Ye calendar nahi padhai ki cheez hai”.

As we moved ahead with our conversation about our duties and details of the festival, there came another middle-aged man asking “Arey ye kagaz aur hai kya?”  For him it was just another rough page to scribble down anything. 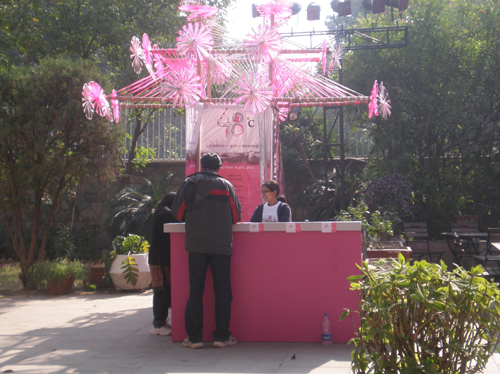 Moving to the first day of the festival, I was given the responsibility of manning the information desk at Max Mueller Bhawan (MMB), KG Marg, New Delhi. Standing there at the desk for the people and attending phone calls that was flooded with queries, it was again a close call with people from different stratas of society and with different mindsets – artists, media people, college students, school children, corporate world, embassy officials and most importantly common masses from different age groups.

Some were the creators of the festival – the artists, some just new that it is something related to environment while media was there to make the festival accessible to more people.

Many were there at the desk digging out all the possible information they could have about the festival, then many were there just to collect the free Indian Ocean concert passes. A foreign tourist came at the desk saying “This decoration and pamphlet seems very beautiful, may I know what’s going on here?”. Then the ‘ citizen’ of Delhi was calling up with utter simplicity and ignorance inquiring “Humne paper me ad dekha tha, hum janna chahate hain ki ye 48c hai kya?”

These are only the excerpts of experiences I had on ‘My Close Call with People’ which I extracted to share it on the blog. But of what I gathered, Delhi will be more enthusiastic for more such festivals and will see a much greater participation from its citizens.

Wed Jan 7 , 2009
Share on Facebook Tweet it Pin it Share it If you thought the Commonwealth Games was constructing only on the floodplains of river Yamuna, here’s a piece of news for you. Parts of the University of Delhi have now become inaccessible to the students of the university. Spaces that saw […]