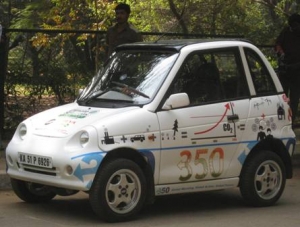 The India Climate Solutions Road Tour has been on the drive. Starting from the southern IT city of Chennai, the tour has now already crossed Banagalore and Hyderabad while also visiting several smaller towns and villages – and is now on its way to the beautiful city of Pune in Central India. The tour has seen tremendous success and has been received by everyone with much warmth, and affection.

Everyone, right from the village folks, the town and city people, the petrol pumps where the electric cars were charged, to the IT parks and the universities that the Road Tour touched – not only appreciated the efforts made, but also promised to do all in their capacity to bring down their emissions and make others aware of it as well.

Driving in Reva, a hope-giving electric car with 350 painted all over, the road tour has been a successful initiative so far, in that it has been a reassurance to all those who have been tirelessly working to be the solution. At the same time, it has also been an inspiration to many, most of whom were keeping away from initiating action on climate change, simply because they did not see others doing it, or they did not know who to connect to for taking action. The road tour has, on its way, touched base with all those who are working towards climate solutions and also with those who want to work towards the same.

The India Climate Solutions Road Tour will soon be visiting Mumbai – the financial capital of India, Goa, Ahmedabad and will reach New Delhi after driving through the beautiful desert state of Rajasthan! – http://indiaclimatesolutions.com

2 thoughts on “A Reva Car to 350, a Hopeful India Climate Solutions Road Tour”