There is a bridge in Lodhi Gardens and there is a plaque that declares that this bridge was constructed in 1556 by Akbar’s minister over a tributary of Yamuna river that used to flow from here toward what is now known as South Delhi. The river since has changed its course and there is no water under the bridge. This is a typical example of what happened in the past when mitigative actions of bounding the river sides of the tributary were not taken, and the river changed its course.  Of course the context was that density of population was low, therefore the infrastructure damage that a river would cause due to course change was manageable. While mitigation is ideal, adaptation in the short run is necessary to cope with the floods that may happen in the course of climate change. 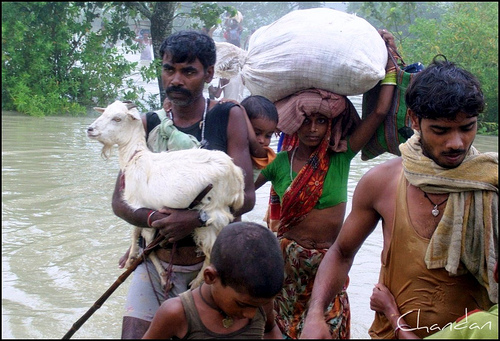 Recently on 15th Febrary 2009 Indian Express carried an article on what happened to Kosi River that caused tremendous inundation and flooding in Bihar a few months back and how the engineers fixed the breach. The impact of damages and devastation due to floods is described very vividly in Solution Exchange for Disaster Management Community this week, by a person working for an NGO and I quote “I recently went to Bihar as part of a team to assess the situation in Madhepura and Supaul, the two districts worst affected by the flood caused by a breach in the Kosi river dam. Based on our observations, we are designing the intervention strategies for restoring livelihoods for these areas. Some of our observations are:

This is an issue with the Himalayan rivers, including our own Yamuna and Ganga servicing Delhi. This could happen to Delhi. Are we prepared?

Fri Feb 20 , 2009
Delhi Bird is organizing the Big Bird Day on Feb 22nd, 2009 (Sunday). Big Bird Day is an annual event of one of the most active bird watching community in the country. It’s the day when we celebrate the rich birdlife that enlivens our city and the surrounding areas while simultaneously spreading a conservation message.