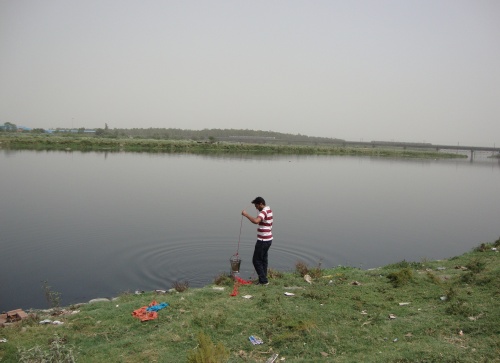 Yamuna River passing through the city of Delhi is polluted and every one is concerned. There is money spent on it. 1200 cr. worth of efforts were spent on Yamuna Action Plan Phase I and Yamuna Action Plan Phase II on creating the STP and physical infrastructure in treating the waste water that gets generated per day in the city. Setting up of Sewage Treatment plants along 42 towns and cities in the up steam of the river was part of the YAP I, while the Phase II is mainly focused on Delhi Metropolitan Region with Delhi Jal Board managing the project.

Serious deficiencies and back log in sanitation and waste water services have resulted in the dwindling of water flow and is 80% of the source of ‘non point pollution’ in the river. The usual rhetoric is to blame the victims: Of the total population of 13.9 million about 6 million or 45% lives in Jhuggi Jhompadi slums. They do not have piped water supply all the time and depend on hand-pumps and ground water for other uses and open defecation is a norm with them. They are not connected with drainage and so the waste water is not collected and treated before it goes back to Yamuna and hence this is the status.

What is missing in the rhetoric is empathy and compassion for the people who are struggling for survival, earning a livelihood and sending the surplus to villages they come from. Being tactful and not embarrass them, when you share with them your ideas about living in urban areas, among other things it involves defecating in enclosed areas.

What is possible is creating Ownership of the city in the minds of people who live in the JJ Slums. I want to share with you two initiative. Prakash lives in Ashok Nagar and is proud to be a resident of Delhi. He decided to take action in his lane. He had a meeting of 20 houses and they agreed to contribute to clean the open drain on a monthly basis and raise level of road in front of their houses. Second is by Ramesh who lives in a JJ Colony near Trilok Puri. He decided to plant trees in the plot reserved for public garden next to the local temple. He enrolled the Pujari to support him in this action.

This is a slow beginning and will take a long time to clean up the Yamuna. Many more need to take ownership of the city and clean it up and will need encouragement and support. But the fact is small localized initiatives coming together, is the only way Yamuna can be cleaned and remain clean, after all the pollution also took over 30 year to reach this level.

2 thoughts on “Cleaning the Yamuna”

Sun Jun 21 , 2009
Share on Facebook Tweet it Pin it Share it Pin it Email The 3rd Renewable Energy India 2009 Expo–South Asia’s largest event on Clean ‘n’ Green Energy will be held at Pragati Maidan, New Delhi from 10-12th August 2009. The Expo will provide an invaluable opportunity for delegates to witness the latest technological trends […]