Earth Hour is a WWF initiative where citizens around the globe show their support for action on climate change by turning off lights for one hour. This year the switch off is being observed on March 27, 2010, from 8.30 pm to 9.30 pm. 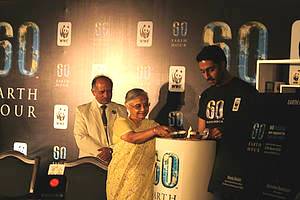 The campaign was recently launched by the Chief Minister of Delhi Smt. Sheila Dikshit and film actor Abhishek Bachchan, in the presence of WWF-India’s SG and CEO Mr. Ravi Singh. Abhishek along with Smt Sheila Dikshit lit the ‘candle of hope’ encouraging citizens of India to ‘switch on’ their minds and showcase solidarity and commitment towards climate change and energy conservation by ‘switching off’ the lights for one hour on the 27th of March.

Earth Hour 2010 is expected to be a culmination of over one billion people around the globe, in more than 6000 cities and towns worldwide, turning off lights and showing support for action on climate change. Mr. Ravi Singh, Secretary General and CEO, WWF-India, said, “Earth Hour 2009 was the largest climate action in history. It was heartening to receive tremendous support for the campaign from all sections of the society all across India it symbolized the aspirations and willingness of our citizens to adopt a more sustainable lifestyle. He hoped Earth Hour 2010 will have even wider participation.

Hon’ble Chief Minister of Delhi Sheila Dikshit reminded everyone of how Delhi was the lead city for Earth Hour 2009 when India joined this global campaign. Several historical buildings, office complexes, RWAs, shopping centers and hotels switched off in support, resulting in close to 600 MW power saving in Delhi alone. She expressed hope as well as confidence that Earth Hour 2010 will also be taken forward in Delhi in a similar manner, only with even greater participation.

Mon Mar 15 , 2010
Meri Dilli Meri Yamuna, an initiative of The Art of Living which finds full support from Delhi Greens, is a project for making a difference to our city, Delhi-NCR. River Yamuna is immensely important for the economic, ecological and basic needs of the region and its people. But, over […]