What was perhaps a never before seen sight in the history of Yamuna River cleanup actions in Delhi, lakhs of people turned up in the vicinity of Purana Qila to accept ownership of the dying river and take an action oriented pledge to clean Delhi’s lifeline. An awakening call by the spiritual leader H.H. Sri Sri Ravi Shankar in the presence of the Delhi Chief Secretary, Mayor and scores of renowned personalities from different fields did what is otherwise considered impossible by many. Smt. Kiran Walia also graced the occasion. “Guruji is known for making the impossible possible”, explained a devout from among the crowd.

Meri Dilli Meri Yamuna: the call to action began with a Shankh Naad by Sri Sri Ravi Shankar–who was joined by thousands in the crowd–exhibiting the unity and oneness among the masses for the cause, beyond caste, region, religion or even the red tapism! Yamuna then came alive on the very stage, with the amazing play performance by a group of differently abled citizens and directed by Shri Salauddin Pasha. The daughter of Surya – the Sun God, and the sister of Yama, the God of Death, is shown to get so fed up with the pollution that she decided to return to her father. And only after being illustratively convinced by Her brother and by the Sun God, on how Delhi will die without her, and after getting a call by the dying Delhiites, does she agree to return.

This was preceded by a beautiful song on Yamuna by Chitra Roy, which underlined the importance of the river to all of us. H.H. Sri Sri was present throughout and kept encouraging the people for taking action now and becoming adamant for ensuring Yamunaji is once again clean and full of life. The cheers from the massive crowd was enough for any environmentalist in the city to become full of energy and reassurance.

The Cleanup campaign of the banks of Yamuna will begin from today, and would be a 8 days programme which will be adequately followed up from time to time. As called by the Guruji, the masses have also been asked to keep themselves aware of every government policy for cleaning the river water, help the Government wherever required and also keep a check on the spending of public money.

ALL DELHIITES ARE INVITED TO JOIN THE RIVER CLEANUP CAMPAIGN AS BELOW: 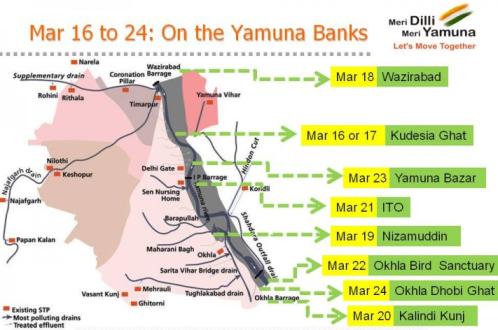 To participate in the 8 Days, 8 Ghats Cleaning Drive from 17 to 24th March 2010, please contact the respective volunteers at the following numbers: