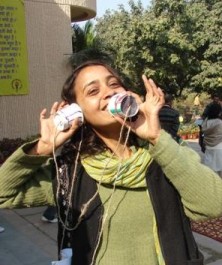 No doubt there are environmental costs to the rolling out of the physical infrastructure like water supply pipes or roads or electric city production and distribution and even telecom development. We are all concerned of the cost to the environment. The public policies like Jawaharlal Nehru National Urban Renewal Mission (JNNURM) gets a flack from us development professionals for similar reasons. But have we seriously considered what life is like without any of these infrastructure roll outs?

I clearly remember that October night, the night before Bhaiya Duj in Diwali. I was standing in my neighbours house some twenty five years ago using their large black telephone instrument. It was almost past 10.30 pm. I had already made one wrong number, one engaged call and another got disconnected. Now the telephone was ringing at the other end. My neighbours were my very good friend’s parents, but their patience was now wearing out.

Before this, I had been trying this call from 6 pm onwards using public telephones and had already spent Rs. 5 over a call that costs fifty paisa. The last call attempt was one from the corner grocery store. This telephone had a queue of users. When my number to dial the call came, and I had barely managed to get the neighbours of my aunt to get her on their telephone, the shop keeper disconnected saying it is past three minutes and he would not make any exceptions.

My aunt lived at quite a distance from where we stayed in the city. Next day we had plans to visit her with my father who was traveling. He had earlier in the day called my mother on her office telephone to say that he will not reach early morning as planned but will reach by noon so we need to make our annual visit to my aunt a dinner instead of lunch. When my mom reached home from office I was assigned to convey this message to her. Now, at 10.30 pm, once again I had managed to get through to her neighbour and they left the telephone on hold to call her at this late hour…and then the telephone, after 5 minutes of being on hold, got disconnected.