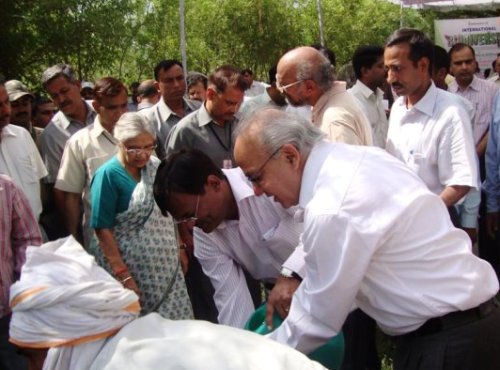 Top Delhi Government officials came together on May 22nd to plant trees and greet the students and citizens gathered at the Aravalli Biodiversity Park (ABP) to mark the International Biodiversity Day (IBD) 2010. The theme for this years IBD was declared to be Biodiversity, Development and Poverty Alleviation. Hosted by the Dept. of Environment (DoE), GNCT and the park management at ABP, the event saw participation from students from some six schools and residents and citizens from around the Park. Key officials from the DoE including the Environment Secretary arrived well in time to receive the CM and the Chief Secretary. On their arrival, they were escorted to the plantation area for sowing the tree saplings.

Dr. Anil Kumar, Director, Dept. of Environment invited all distinguished guests on the stage and welcomed everybody who had turned up for the day. This was followed by a street play organised by the students of St. Francis School who emphasized on the need to initiate green action, spread awareness and go green. A short speech by Prof. C.R. Babu, Emeritus Professor, CEMDE, School of Environmental Studies, University of Delhi followed where he explained the importance of the Biodiversity Parks in Delhi and urged the children to keep themselves aware and make themselves involved in green action in the city. A series of other speakers followed Prof. Babu.

Mr. Rakesh Mehta, Chief Secretary then took to the podium and highlighted the might of the Nature and that no matter how hard we try, we cannot control it in any way. His short speech pressed upon the fact that in order to survive and prosper, we must respect Mother Earth and all development activities should be in harmony with Nature. The audience was then greeted by the Chief Minister Smt. Shiela Dixit, who began by congratulating the children for coming up with good grades in the Class 12th Board results. She then encouraged the children to take forward the green cause and appreciated the street play that was organised.

The CM agreed that the greatest challenge we are facing today is that of environment versus development, and that until the developing economies like ours make some transition towards being developed, we will never be able to make environment as the top priority. The CM also congratulated Prof. Babu and the entire Park team in reclaiming the mining affected Aravalli with biodiversity of all sorts. Before concluding her speech, the CM informed the audience of the tragic Mangalore air crash and observed a moment of silence. This followed feedback from the audience and concerned residents from across the Park raised some issues which were answered by both the CM and Prof. Babu.