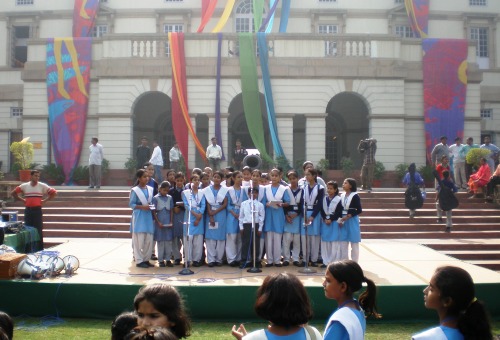 The room at the Nehru Memorial Museum & Library was filled with carefree laughter and giggles of innocence as we stepped in to meet some of the future generation of our nation. Invited by the Children Resource Center to conduct a workshop and brief the children attendants on the issues of water, Delhi and the River Yamuna, the first challenge that came was not ‘Yamuna’ but their understanding of water as a natural resource.

A simple demonstration was carried out by placing three types of water in three different containers: clean, polluted and mineral. The amused kids then started throwing many interesting questions even before we could get them to answer to the planned interrogations we intended to do. They cleverly differentiated the types of water in the three containers – one as bottled water, second as nala paani and the third as normal drinking water in a glass. Catching them at the right spot, we went on to explain the difference between the three types of water placed in front of them. And when all were cleared about the difference, the children were asked to draw their perception of water and the Yamuna; the Yamuna that exist for them. A short commotion broke forth as they took the challenge excitedly and settled down to draw.

After each and every kid had drawn and put Yamuna on canvas, we called them one by one to come forward and give a short description of what they have drawn. Funny, simple, colorful, thoughtful, imaginative, and many more adjectives struck our mind while hearing them explain their views. Opportunity was given to other kids to raise questions to which the presenter had to give answers. A little and funny debate happened throughout this session. It gave them a refreshing touch to understand each other’s take on water and the Yamuna.

We took a short break after the drawing session. It was a tough job to get them all indoor again for the next session. They loved playing in the garden, just outside the room. Finally everyone was hurried in to the room and a short animation movie clip on water issues relating to climate change was shown. All went silent and got glued to the screen, with a slight interruption in between as they raised their concerns and doubts. The short movie brought back their attention to the discussion of water and Yamuna and our common environment. We cleared their doubts and explained in brief the importance of water and saving Yamuna as such. The end was satisfactorily welcomed by all, both in terms of understanding and the very fact that the children could leave to join their normal day’s routine of fun and living their innocence!