India was voted as the most environmental friendly and green country in the world by none other than National Geographic. Five seconds later, I smell leaves burning down my lane.

Since 2008, National Geographic has been carrying out annual surveys to measure Greendex: sustainable consumer behavior across the world. This year, the online survey was carried out in collaboration with Globescan-Global Public Opinion and Stake holder research, where 1000 people in each of the 17 countries were surveyed and asked about their consumption pattern in the following 4 areas:

Knock Knock!! Are we helping the protection of the environment by chance or by choice?

Do you forget the fact that we face the sun’s torturous rays almost throughout the year? When we say that we Indians are less likely to install a home water heating system we forget to mention the fact that we hardly need it!

After all, we are a young nation robbed by the Britishers. Sixty years after independence, 42% of India falls below the international poverty line (World Bank, 2005). If  49% of us Indians do not own, rent or lease cars and trucks then it is not because we love the environment so much, but because we simply cannot afford these expenses. Don’t we prefer to repair our damaged television or buy a second hand fridge instead of a new one so that we can save money? Environment conservation. Really? India has always been an agrarian country not to mention a religious one too. I don’t think a typical Indian family would consume less beef to save the environment. Hindus don’t eat beef! The gates of heaven shut down for you if you do!

I do not intend to show how stingy we Indians are. It is true that we Indians do our best in every possible way to cause as less damage to the environment as possible. What I am trying to say is that the questions involved in this survey cannot determine the level of concern we have for our environment. India earn its position not because it is environmental friendly but because of the fact that being eco-friendly has been a way of life for us ever since the beginning of our civilization. So the big question is

Do you think the questions asked in this survey are appropriate for a country like India? or Should we just celebrate that we came first in a survey?…(without even working hard for it)

It seems that the fruits of cost cutting by millions in India has been rewarded after all, even if it does nothing to lower down the prices of  the goods we most commonly use.

This post has been submitted by our SOIP candidate Saloni Tandon.

2 thoughts on “India Voted as the Most Environment Friendly Nation in the world. Chance or Choice?”

On Being an International Climate Champion 2010

Mon Jul 5 , 2010
13      Youth today are the agents of change and I am fortunate and excited to belong to same enthusiastic age group! Life is a precious gift, so everyone can and should contribute their part to make this world a better place to live in, in every way that one can. This […] 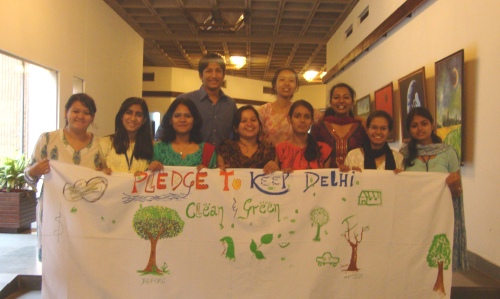