And We Now Present the Delhi Monsoon 2010 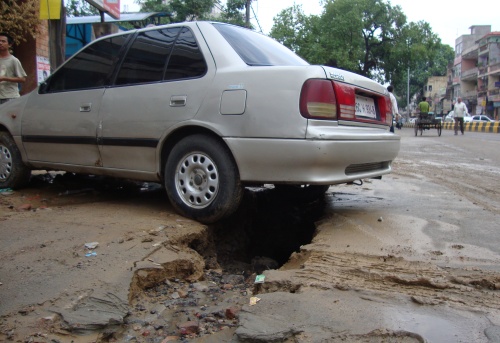 Delhi rendezvous with Monsoon 2010 finally took place in the week starting July 5th and the city has since then given a mixed response to the rains. The Monsoon itself is such that the city is experiencing only intermittent rains with the sun not refusing to give in. It came as a shock to us when the old chaiwallah at Roshanhara Bagh–a not so well kept historical green space in the city–looked up at the sun among the clouds to say, “aajkal ke baadal bhi aajke naujawano ki jawaani ki tarah hi hain. Chadne se pehle hi utar jaate hain.”  While we took that with a pinch of salt, for we wanted to disagree but didn’t know how, we just decided to put the salt in our tea in the best interest of our throats.

The first rain, as we remembered was told to us in our even younger days, settles the dust and impurities from the sky above and should be avoided. Unfortunately, the city’s infrastructure either did not know this, or could not avoid it and part of it crumbled under the Monsoon effect. The first rain may have settled the dust and the impurities, it definitely did “resettle” a lot of other ‘loosely packed’ materials! Other than that, we saw chidlren playing, roadside vendors running for cover, trees washing themselves, cars getting auto-cleaned and amidst all that, a concrete mixing truck which was in the middle of covering a drain, stop and stand aside.

In the coming few days, we would be following the monsoonal rains as they interact with the various facet of the city life as part of the Delhi Monsoon 2010 campaign. We also look forward to hearing your suggestions, comments, feedback and receiving your photographs, stories and bytes. Leave a comment or send it to monsoon2010@delhigreens.org