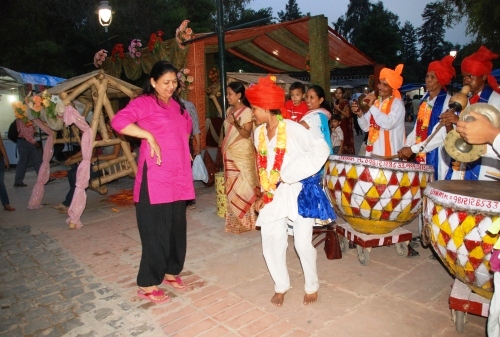 The monsoon has been surprising the capital with its on and off fall, and yet the people are fully drained in its relieving delight. Delhi is geared up to enjoy the monsoon with a special festival known to many Indians as ‘Teej’. This festival is celebrated with great enthusiasm and devotion especially by the women in India. Celebrated at the outbreak of the monsoon season, Teej is also known as the ‘Sawan festival’.

Organized from August 7 to August 12, 2010 at Dilli Haat, the Delhi Tourism Department has given the city a monsoonal treat during Teej. A blissful and colourful festival is being hosted here with different cultural events and a range of Rajasthani cuisines. Women also had the privilege of selecting from a variety of designs of mehendi from across North India. Women were seen selecting special designs to match the mood of the festival. It is believed that the darker the henna on a girl;’s hands, the more will she be loved by her husband and in-laws.

Another important ritual related to the festival is the worship of Nyagrodha tree or Vat Vriksha. The tree is considered highly auspicious with its hanging branches reflecting knowledge. Women tie swings to the Vat Vriksha and dance while enjoying the showers of rain. Dilli Haat presented the visitors with artificially wood craved swings that became one of the most sought after element of the festival for many. Cultural programs were organized by Sahitya Kala Parishad in the evening hours. Free saplings were distributed to the visitors during the festival. Dance and music throughout the evening entertained as well as promoted the rich Indian cultural heritage.