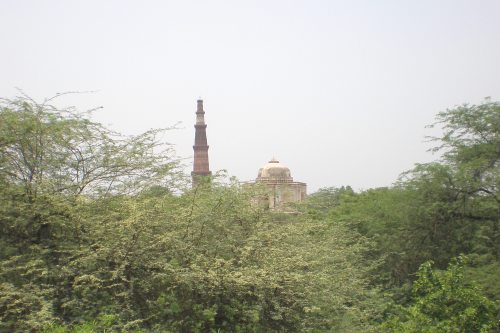 Delhi, as the National Capital of modern day India turns one hundred years old (or some would say young) today. On 12 December, 1911 the National Capital of the then colonized India was shifted by the British from Kolkata to Delhi. With this, the political focus also shifted and Delhi was re-established as the center for ruling the Indian sub-continent. This was not the first time that Delhi, which has reference dating back to 1450 BC, became a capital.

Between the 12th and the 19th century AD, Delhi was the capital for many rulers. Siri, Tughlakabad, Jahanapanah, Ferozabad, Dinpanah, Shergarh and Shahajahanabad are the historic ‘seven cities’ that took shape in Delhi. Shahajahanabad, built by Shah Jahan between 1639 and 1648 AD remained the capital of the Mughal Empire until 1857. The eighth city, or the present New Delhi, was built by the British Empire and is the one which is celebrating its 100 years today.

What needs to be understood here is the reason that made Delhi the ‘capital-of-choice’ for many a rulers in recorded history. The answer is not too hidden and lies in the city’s landscape and topography. Two characteristic geographic features – River Yamuna and the Delhi Ridge are indeed the reason why Delhi enjoyed the status that it still does.

Now aptly called the lifelines of Delhi, the Yamuna and the Ridge are Delhi’s natural resources that have served the city since time immemorial. While River Yamuna ensures the much needed water which is essential for the survival and sustenance of any settlement, the Ridge, the extension of the Aravali range, provides a natural protection thus making Delhi a site of strategic importance.

The river on one side and the Ridge on the other made Delhi the perfect capital for any man who had a dream to conquer, conquest and rule. It is a matter of separate discussion that any man who made Delhi his capital could not really last his rule.

Delhi today manifests the symptoms of uncontrolled urbanization with respect to population, transport, industrialization and trade, and commercialization. The city, made initially to cater to 70,000 people has grown outward to host over 16 million people in the present day.

This has put understandable pressure on Delhi’s natural resources and led to depletion in quality of the ecosystem services provided by these. Yamuna is now a drain that flows in one part of the city and is known only because there is a trans-‘Yamuna’. The once continuous Ridge is now split into parts. It lies quiet but is slowly facing ecological crisis of all kinds.

Both the Yamuna and the Ridge have been opened up for construction allowing urbanization to destroy the very “lifelines” that first facilitated it. And now, there is an urgent need to highlight the issues of the river and the Ridge before more damage is done to these.

When the lifelines of a system are damaged, its sustainability becomes difficult and its ability to host life impossible. Delhi’s survival and sustainability is intricately linked to the health of the Delhi Ridge and River Yamuna. The Ridge acts as the green lungs, an air purifier, provides a green refuge and what not. The River brings all forms of water – surface, rain and ground water – for the citizens of Delhi and replenishes us.

But in the hustle and bustle of our daily lives, most of us forget this and remain detached from the essential reality that we too are part of the ecosystem and will be impacted by any unnatural adverse change. It is now time to realize this truth and be more aware and informed about our surroundings. On this 100 year ‘capital celebration’, give Delhi the gift it deserves. Give it some of your time and it will only be an investment in your own future. Here’s a toast to a ‘forever’ Delhi!

24 thoughts on “Delhi: 100 Years of Being the Capital, Time Now to Save its Lifelines”

Fri Dec 24 , 2010
241       For those of you who were inspired by Shahrukh Khan’s frustration in Swades and are concerned about India’s overall development, the time has come! The State Bank of India (SBI) has initiated a Youth for India fellowship programme funded and managed by the SBI in partnership with other NGOs. […]