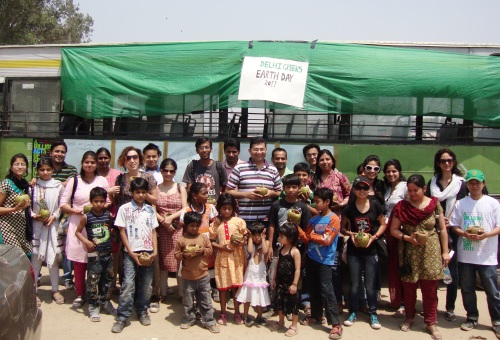 To commemorate Earth Day 2011, Delhi Greens made an attempt to re-connect the citizens of Delhi with the very lifelines that support them and the city. In partnership with the Earth Day Network and ‘Jamghat a group of street children’, Delhi Greens organized an urban ecotour focused on the two lifelines of Delhi: River Yamuna and the Delhi Ridge. We received scores of applicants who showed interest to be a part of the urban ecotour, out of which 45 citizens were selected on a first come first serve basis. Under-privileged children from Jamghat a group of street children were also a special invite to the Earth Day urban ecotour. Each participant was thus enable to contribute their bit in achieving the Billion Acts of Green that was targeted by the Earth Day Network earthwide.

The urban ecotour began at the Vishwa Vidyalaya (Delhi University) Metro Station where the standard DTC Bus hired for the occasion was decorated with Earth Day messages! Participants were given an introduction to the urban ecotour and the relevance of organizing it on Earth Day and were then taken to first destination: River Yamuna in the upstream of Wazirabad barrage. The participants were amazed at the relatively cleaner Yamuna upstream of the barrage. The cool breeze and clear water along side children bathing in the River greeted the participants at this destination. At a little distance downstream, the barrage itself could be seen as it stopped the mighty Yamuna from entering the city directly.

From there  the green riders were taken to the river downstream of Wazirabad barrage near Pontoon Bridge at Majnu Ka Tila. The dirty and polluted version of the river was shown to the participants here. The group was briefed how the Wazirabad barrage acts as a guillotine for the river, as the majority of clean Yamuna water is stopped and supplied to Delhi’s ever increasing population. People were unable to stand the foul smell at this site as they wondered why was the river left in such a sad condition. The urban farming on the banks of the River was equally surprising for many especially when they figured that the fields were being irrigated by the water from the contaminated Yamuna river. Participants were also told about the history of Majnu Ka Tila and the political ecology of urban water transformation.

After seeing one of the two lifelines of Delhi and its status, the tour headed towards a closer interaction with the second: the Northern part of the Delhi Ridge. The Bus stopped outside the Kamala Nehru (North Delhi) Ridge and everyone was asked to write their earth day message on the chart papers stuck on the bus. Entering the ridge in the middle of an otherwise sunny day was a very relieving experience for everybody. It was surely an lesson that made everyone understand the importance of an urban green space. The participants were briefed about the history, geography, politics and the ecological importance of the ridge. Why the Ridge is known as the green lungs of the city was explained to everyone by highlighting its role in cleaning the city’s air.

Here at the Ridge, the participants also witnessed a snake climbing a nearby bush which was an exciting experience for all. Water bodies present in the Ridge, like the Khooni Khan Jheel, the birds in the ridge and the status of the health of the Ridge was also illustrated during the nature trail. The participants also witnessed and applauded a thirsty monkey which opened a municipal tap to drink water from it and closed the tap properly after drinking from it. The ultimate objective of the urban ecotour remained that of re-introducing the citizens to the natural heritage that they need to appreciate and protect, which was achieved when the participants expressed their interest to learn more and vowed to act even more responsibly.

This year, the Earth Day was marked by 100 million Acts of Green and now that the Day has passed, the Billion Acts of Green campaign continues. The new goal is to reach a billion acts of environmental service and advocacy before Rio+20. Delhi Greens re-dedicates itself to the cause of ‘our common environment’ on the Earth Day and will continue its efforts to disseminate environmental information and generate awareness for creating better informed and more responsible citizens. Let every day be Earth Day!