1. New Delhi one of the longest-serving capitals in the world with remnants of 11 capital cities

The British-era neem, jamun, peepal and imli trees are luxuriantly appropriate for the heated dust bowl they were planted to counter, unlike the ornamental palms favoured by the newest builders, Delhi Metro and Delhi Airport.

The Durban climate talks finally ended more than 36 hours after the scheduled closure on Sunday early morning. The world agreed to a new global climate change regime that will come in to force starting 2020. India took over centre-stage as a force to reckon with, regained its position as the leader and moral voice of the developing world as the EU and the US were forced to address its demands.

Launched about four months ago by Suzlon the Pure Air Lovers Society (PALS), registered over one million members. Suzlon is claiming that PALS is among the fastest growing campaigns of its kind in the country, exceeding an average of over 9,000 registrations per day.

The state government has asked the Delhi Development Authority to provide an additional 2,800 acres of land to facilitate industrial development in the Capital. Besides, the agency has been directed to make certain changes in the land use norms. The suggestions have been made keeping in view the revision of Master Plan of Delhi-2021, which will take place the next year.

As part of the new master plan, the 100-acre Delhi Zoo on Tuesday added a new feature in the form of an additional enclosure to house animals from Central India. Animals like the black buck, nilgai, sambar, spotted deer, barking deer and gaur have now been housed together for the benefit of visitors.

People in unauthorised colonies in Delhi will not have to live under lurking fear of sealing and demolition of their houses and shops as Parliament on Wednesday passed a Bill for maintaining a status quo in regard to these areas up to December 2014.

7. MCD parks funds, but no space for cars

Municipal Corporation of Delhi has collected nearly Rs 900 crore as conversion and parking charges from traders, but the parking facilities are far from adequate. Last year, the Environment Pollution Control Authority had asked MCD to provide parking on 3000-odd commercial and mixed-land-use streets by August 2010, failing which the civic agency was supposed to return the money it had collected for conversion and parking.

What makes the Metro train tick in Delhi?” This was the question posed by Rashmi Sadana, an IIT-Delhi alumnus who is busy writing a book aimed at digging out the answer. Sadana, who has authored a book on Delhi, has been riding Metro trains, speaking to the people behind it and the people travelling on it.

According to chief minister Sheila Dikshit, Delhi is one of the most comfortable cities to live in despite its burgeoning population and pressure on amenities such as road, water, power and transport. “It is a mini India. People from all over the country come and live here.

The ambitious plans of the ministry of environment and forests (MoEF) to conserve lakes and rivers in the country have failed to deliver, with more than 80% of the projects not being completed on time and others not being utilized despite being constructed.

Coal India has initiated the process of seeking environmental clearances for 218 mines, which were being operated without the green nod, Parliament was informed today.

12. Canada pulls out of Kyoto pact to avoid penalty

Canada withdrew from the Kyoto Protocol to avoid the $13.6-billion penalty it would have had to pay for failing to meet the emission reduction target that has been set for next year.

Tue Dec 20 , 2011
Amidst discussions, debates and the unavoidable walkouts, the Parliament House today had a rendezvous with the idea of "happiness" as a measure of the country's success, growth and prosperity. 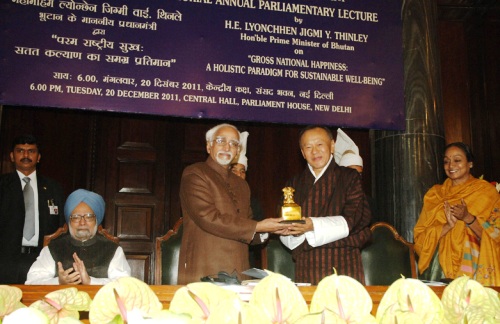