1. Suggest changes to save BRT: HC

The Delhi High Court on Monday said the government should “take in right spirit” the criticism against the Ambedkar Nagar-Moolchand BRT and suggest how it corridor could function with some changes.

The fate of Delhi is tied intimately to that of the Himalayas. The city’s water-needs are met by Himalayan rivers; part of our power requirements too is met by energy harnessed at dams on Himalayan rivers; and the forests form a “sinking point” for the pollution we generate.

Even as the Delhi cabinet has passed the order banning all kinds of plastic carry bags, it will be an uphill task for the state government to implement it.

4. Can paper bags replace plastic ones in Delhi?

They might be a nuisance for the environment but plastic bags have undoubtedly been of great service. One would think they are precious and rare the way some are stored with care, pressed under mattresses, emerging only on special occasions.

Another panel has been set up by the ministry of environment and forests to decide ecotourism guidelines in core areas and peripheral buffer zones of tiger reserves, and submit a report within 10 days.

The massive hike of Rs 5 in the price of diesel and the removal of subsidy on cooking gas beyond six cylinders will hit the common man, already caught in a price spiral, very hard. In Delhi, the common man’s anger has already been stoked by a steep hike in power tariff on one hand and corruption charges against political leaders on the other.

Environment ministry has objected to the Planning Commission roadmap to deal with climate change in the Twelfth Plan. The ministry finds the Plan panel’s approach to dealing with climate change to be lopsided, as it has focused on mitigation or reducing emission intensity of the economy and paid little attention to adapting to the adverse consequences of climate change.

Environment minister Jayanthi Natarajan said the country’s progress is not being held up by environmental issues and goals of sustainable development.

No nation can face the challenge of climate change alone. On that note, the fourth edition of the Earth Care Awards crossed borders to bring into its fold the Saarc nations. The award ceremony on Friday was hosted by The Times of India and the JSW Foundation in association with Centre for Environment Education.

Mon Sep 24 , 2012
All disasters--whether floods, earthquakes, cyclones, droughts or fire--inevitably cause upheavals not only in the physical but also in the social and economic context where they occur. Here are some tips for coming out alive out of a fire crisis. Because it is better to be aware and safe, than to not be there to be sorry later on. 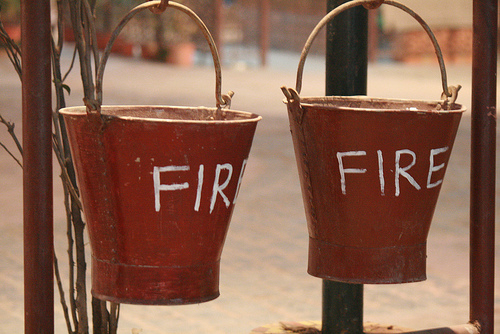