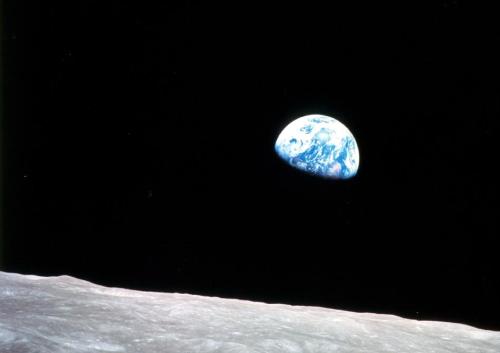 Earth Rise: The Apollo 8 image of the Earth from lunar orbit (Dec 24, 1968). “The vast loneliness is awe-inspiring and it makes you realize just what you have back there on Earth.” – Apollo 8 broadcast

22nd April is celebrated as Earth Day, a day when more than one billion people come together to take part in calling for action for protecting the only Planet we call ‘Home’.  The history of Earth Day dates back to 1970 when, after the 1969 massive oil spill in California, Santa Barbara, the then U.S. Senator from Wisconsin Gaylord Nelson founded the concept of Earth Day. Inspired by the student anti-war movement, Gaylord Nelson realized that if he could infuse that energy with an emerging public consciousness about air and water pollution, it would force environmental protection onto the national political agenda. Earth Day 1970 achieved a rare political alignment, enlisting support from all political parties, government and private agencies and from all sections of the society.

The first Earth Day led to the creation of the United States Environmental Protection Agency (USEPA) and the passage of the Clean Air, Clean Water and Endangered Species Acts. Consequently, other countries followed and soon ‘environment’ received legal attention and laws for its protection! Today, 43 years later, we have a large number of laws for the protection of Earth and its environment. In India, the Environment (Protection) Act first came into force in 1986 and is governed by the Ministry of Environment & Forests. Gradually, several laws have been formulated for safeguarding the environment which also fall under the purview of other Ministries and also the State Governments.  Of late, a number of environmental laws have also been facilitated or put forward by the Government of NCT of Delhi for ensuring urban sustainability of India’s national capital.

This Earth Day 2013, Delhi Greens initiates a campaign to promote and upscale the implementation of the various environmental laws formulated for protecting Delhi’s environment and ensuring sustainable urban growth of the city. The “Green Citizens Awareness Campaign (Green CAP)” will work with an objective of identifying and spelling out legally binding environmental legislation relevant to Delhi city and generate awareness about these existing laws thereby ensuring their implementation for sustainable urban development of India’s national capital. The campaign strategy will largely include citizens engagement and participation in the implementation of these laws. The following existing legal measures will be promoted in the first phase of the campaign starting Earth Day 2013:

1) Ban on cutting of trees without seeking proper permission from the appropriate authority: This will help improve the green cover of the city.

2) Ban on burning of leaves in Delhi: This leads to pollution and smoke which further threatens the health of the city and its individuals (especially those already suffering from asthma and other bronchial diseases): The Waste Management and Handling Rules in India bans such an act.

5) Ban on indiscriminate feeding of monkeys (birds): This leads to animals like monkeys no longer depending on their natural skills to fetch food, or the selection and flourishing of only some bird species capable of accessing and digesting domestic food (e.g. pigeons), it is leading to an anthropogenic change in urban biodiversity. It is for this reason that it is now banned to feed the animals (and in some cases birds) at all the places in Delhi. There have been places designated by the Government to leave the animal food for those who wish to feed the monkeys, etc. for religious reasons. The feeding of monkeys also leads to their leaving the urban forests of Delhi and entering residential areas which has led to the deaths of people in the recent past. At the same time, the entire food chain of the urban forests in Delhi has got disrupted due to this.

6) Policy for prevention of concretization and choking of trees in Delhi: A legal provision makes it mandatory that every tree in Delhi be given some (usually 6 x 6 feet) breathing space around it for water to percolate and the tree to hold upright. In the recent past, many trees have fallen or gone weak due to concretization up to the tree trunk.

7) Blanket ban on the use of polythene bags in Delhi: Polythene bags are non-biodegradable and contribute even more to the waste load of the city. In addition they clog the natural and municipal drainage of the city and also pollute River Yamuna.

Delhi Greens invites the support and participation of other agencies, NGOs, corporate houses, government departments, universities/colleges, schools, RWAs and all those interesting in securing the environment of Delhi city in the Green CAP campaign. All of you can play a greater role in ensuring urban sustainability of Delhi city by simply realizing our debt to Mother Earth as also to the generations to come! Here’s wishing everyone a Happy Earth Day 2013!

Public Lecture on Elephant, Empire and Ecology in Ancient India at NMML

Tue Apr 30 , 2013
1       The Nehru Memorial Museum and Library invites all interested to a public lecture on ‘Elephant, empire and ecology in ancient India’ by Prof. Raman Sukumar of the  Indian Institute of Science, Bangalore. The elephant rose from the status of a supreme animal, Gajatame, in early Buddhist India to that […] 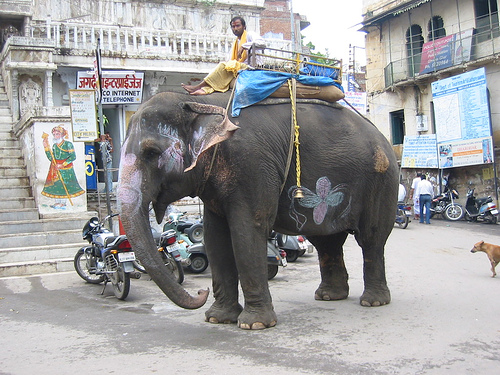