Celebrate Van Mahotsav: Bring Alive the Spirit to Plant and Save Trees 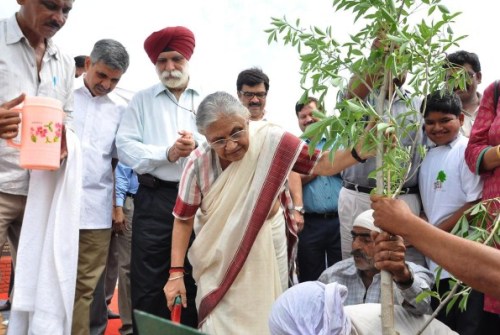 “Sir santhe rooke rahe to bhi sasto jaan“ (If a tree is saved even at the cost of one’s head, it’s worth it.”), noted Amrita Devi Bishnoi as she hugged the trees to stop them from being felled. Trees have been serving humanity since times immemorial. The very existence of man would not have been possible without trees and other green plants. Trees also play an important role in the achievement of human security. Whether it is through the provision of livelihood resources (e.g. food, medicine, cooking fuel, construction materials etc) or ecosystem services such as water and air purification, climate regulation and erosion control, trees undeniably provide security to humans and are a means for sustaining life. Consequently, loss of trees will certainly result in human insecurity leading to global warming, acute vulnerability to natural hazards and a polluted & unhealthy Planet. With this understanding in mind, K.M. Munshi, the Union Minister for Agriculture and Food in 1950, started an annual tree planting festival in the month of July and called it ‘Van Mahotsav’! Van Mahostav was largely initiated to create awareness for the conservation of forest and planting of new trees.

The dwindling number of rainy days and increase in the intensity of precipitation events raises serious question on the increasing ‘developmental’ activities taking place at the cost of cutting large number of trees. India has long been vulnerable to floods, droughts, heat waves, cyclones and other ‘natural’ disasters and this trend is increasing with each day. With continuous human intervention against Nature, these disasters can no longer be considered ‘Natural’. An immediate example that comes to mind is the colossal event we recently witnessed in Uttarakhand, which claimed the lives of thousands of tourists and locals and has left many stranded. The disaster has once again triggered the Environment versus Development debate. The hydroelectric projects undertaken in the region after clearing the natural forest as well as non-responsible tourism practices have now jeopardized the lives of millions. The calamity in Uttarakhand serves as a harsh reminder for us to reassess the role of trees in natural disaster prevention and mitigation. Indeed there have been people who saved themselves from the gushing flow of the river by holding on to a branch or climbing a nearby tree.

To further highlight the importance of trees, let’s take the example of dense mangroves forests growing along the coastal areas of the country which helped in reducing the devastating effect of the 2004 tsunami. The mangroves absorbed the oncoming waves and protected a large many human habitation. Mangrove forests grow where the ocean meets the land and act as a barrier against storm surges and coastal erosion. Mangroves, the oldest and the most productive wetlands on Earth, not only serve as a silent protector of our coastline, in fact their role extends far beyond. They consists of world’s richest biodiversity of species and are a home to many fishes, supporting the livelihood of millions of people across the world. Mangroves forests are known to contribute more than 80 million metric tonnes to the long term storage of carbon globally. The Eastern coast of India host the largest mangrove ecosystem of the world: Sundarbans, a UNESCO world heritage site and a biological reserve. Despite their ecological and economic importance, this ecosystem is under great pressure. The mangroves are being destroyed at an alarming rate. This is mostly due to deforestation, degradation and conversion to other land uses like intensive shrimp farming. If the mangroves disappear, much of the global primary productivity will be lost.

Trees have longed served humanity in one form or the other. On the other hand humans have only threatened their very existence. Now it is our turn to reverse the damage that we have caused and restore the balance between nature and man and the first step towards this change is to plant trees. So let us all welcome the monsoons by planting a tree during Van Mahotsav and nurturing the ones that are already standing tall. The history of the Van Mahostav plantation drive, which is purely an Indian festival for Nature goes back to the time of independence of our nation. The first such festival took place even before its formal announcement and a flourishing tree plantation drive was undertaken in Delhi in July 1947. Leaders like Dr. Rajendra Prasad and Jawaharlal Nehru had participated in that festival. The festival was simultaneously celebrated in a number of states in India. Since then, thousands of saplings of diverse species are planted with enthusiastic participation of the locals and various agencies like the Forest department.

The ‘Van Mahostav’ festival of trees is a beautiful initiative to save the environment, to which we owe a lot. Everyone is encourage to plant trees in homes, schools, colleges, near offices and contribute in making your city greener than ever before. If you do not find land around you to plant trees, than adopt trees in your colony, school, college or workplace and celebrate Van Mahotsav with full vigour and enthusiasm by ensuring their protection. The first week of July gives us the opportunity to fulfill our duty towards environment and towards trees, on which all of us and our coming generation depends. In the words of John Milton, “Accuse not nature, it hath done her part, do thou but thine”.

8 thoughts on “Celebrate Van Mahotsav: Bring Alive the Spirit to Plant and Save Trees”