1. National Green Tribunal asks UP govt to clarify on pollution by waste plant
Adding a new dimension to the case related to pollution caused by the Okhla waste-to-energy plant, the National Green Tribunal on Friday has directed the UP government to verify claims of that emissions from the Delhi plant are adversely affecting environment and wildlife of Okhla Bird Sanctuary in Noida.

2. In Delhi, sparrow is nobody’s bird
Their chirps are getting fainter. Even 11 months after the state government declared the endangered sparrow Delhi’s first state bird, it has failed to spend any money on its conservation.

3. Action plan on air pollution soon
After several delays, Delhi’s action plan to curb air pollution will finally be presented in the cabinet in the coming week. Environment department officials say they will monitor work on the “roadmap” but it is the responsibility of several other agencies like transport, municipal corporations etc to ensure the policy proposals are rolled out.

6. SC notice to Centre on PIL seeking Euro V norms in India
The Supreme Court on Monday issued notice to the Centre on a PIL which claimed that Indian cities were among the world’s worst polluted and sought enforcement of stringent Euro V pollution norms for motor vehicles and creation of an environment police force to enforce emission norms.

9. Uttarakhand launches “green GDP” to monitor resources
Uttarakhand on Friday became the first state in the country to start tabulating a ‘gross environment product’  (a measure of the health of the state’s natural resources) which would be released alongside GDP figures every year.

One thought on “Environmental News and Media Roundup for Week 27, 2013”

Mon Jul 15 , 2013
Vice President of India Shri Mohd. Hamid Ansari planting a sapling during his visit to PGIMER on the occasion of its 51st Foundation Day at Chandigarh on July 06, 2013. 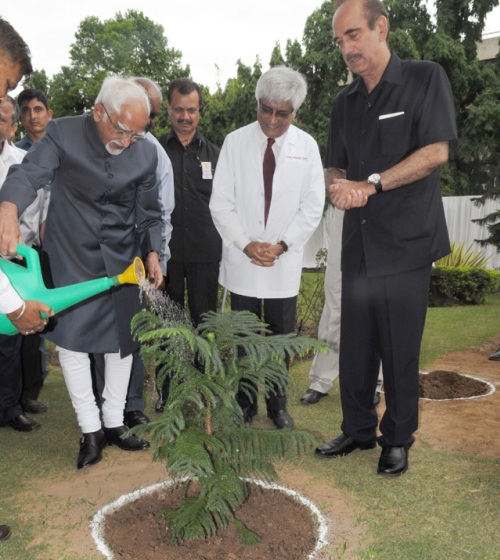