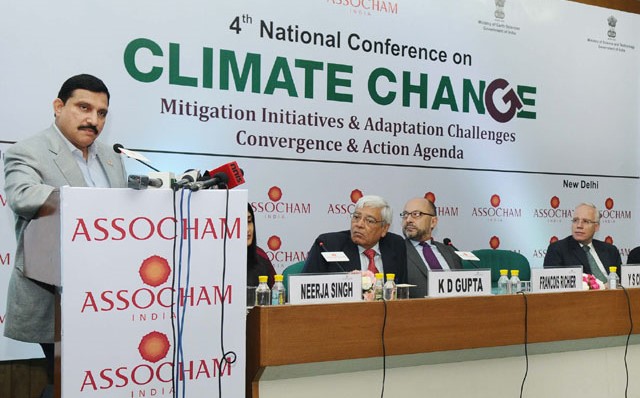 Minister of State for Science and Technology and Earth Sciences, Shri Y.S. Chowdary at the inauguration of the 4th National Conference on Climate Change, in New Delhi on June 18, 2015.

Weekly environmental news roundup from across different media networks for week 25 (between June 15 to June 21) 2015.

Experts in the field of air pollution got together on Saturday to prepare a list of suggestions for mitigating pollution in the city and will submit it to the Delhi government.

To improve the sewer system of a number of colonies in East Delhi, a sewage pumping station at a cost of Rs. 127 crore is being built by Delhi Jal Board.

An exceptionally large rat snake was rescued by the Wildlife SOS rapid response team after being found in a public toilet in Talkatora Stadium.

The Delhi Police have butchered a green swathe as big as a dozen adjoining football fields in north-east Delhi, the Delhi Development Authority has found in its initial report.

The Delhi government has increased the security deposit for cutting down trees and the compensation cost for the loss of greenery under the Delhi Preservation of Trees Act, 1994.

7. Bus depots, train shed, villages could be forced to leave the Yamuna

Bus depots, the Delhi Transco office, DMRC casting yard, power plants and the Central Reserve Police Force and Police camps, DMRC depots at Shastri Park and the Yamuna bank that are coming in the flood plain may soon need to be relocated.

The principal committee constituted to examine delineation of boundaries along the Yamuna’s floodplains has recommended against the regularisation of several colonies in southeast, east and north Delhi that have been included in the list of 895 unauthorised colonies for regularisation.

9. Delhi Government launches bid to save the Capital’s trees

The Delhi government has decided to “substantially” increase the security deposit for cutting down a tree, a move that aims to deter mindless felling while also helping to fund replanting efforts in the hope of saving green spaces in the Capital.

Two weeks remain for the monsoon to reach Delhi but the public works department has desilted only 223 of the city’s 1,014 storm water drains so far.

The National Green Tribunal has asked the Delhi Pollution Control Committee to shut 1,200 industrial units found to be spewing toxic waste into the Yamuna through rainwater drains without cleaning it up.

The muck that is removed from the drains in your neighbourhood ahead of monsoon and dumped on the roadside is extremely toxic and poses serious health hazards, pollution watchdog has found.

13. NGT to hear plea on loading, unloading of goods on July 13

The National Green Tribunal has fixed July 13 for hearing the plea of Confederation of All India Traders seeking modification of ban order on loading and unloading of goods in the capital between 11 AM and 8 PM.

In a move to step up action against offences involving wildlife, the Wildlife Crime Control Bureau as written to various agencies including CBI, paramilitary forces, customs and state police units, asking them to report all such crimes to it.

About 150 air pollution experts from all over the country will attend a day-long meet on Saturday (June 20) to discuss ways to improve the national capital’s air quality, it was announced on Tuesday.

The National Green Tribunal has ordered the Haryana Urban Development Authority to complete the construction of a proposed sewage treatment plant in Gurgaon by March 2017, two years earlier than planned.

17. Delhi government fumes at DDA as officials say they have no spare land for bus depots or landfill sites

The Centre and the Delhi government are heading to another flashpoint, this time over two of Delhi’s most critical issues — public transport and waste management.

Delhiites and activists who are concerned about the issue of environment have started a new campaign called ‘Tree Not for Free’.

For 43-year-old Yash Pal and his family of five, their daily income of Rs 400 has been crushed by bulldozers.

The Nehru Yuva Kendra Sangathan on Tuesday said it will deploy youth volunteers to help clean the Ganga river.

The environment ministry is mulling a threefold increase in cess on water consumption in a bid to check excess use of water by industrial units and encourage use of treated waste water.

Will the Asiatic lion remain restricted to Gujarat’s Gir forest? Looks like that may be the case as the ministry of environment, forests and climate change has decided to file an affidavit in the Supreme Court about difficulties of relocating the animals from Gujarat to Madhya Pradesh.

23. New Committee to Assess Hydro Projects on Ganga in Uttarakhand

The ministry of Environment and Forests has formed an 11 member committee to assess the cumulative impact of hydroelectric projects in upper reaches of River Ganga in Uttarakhand which had come under scrutiny after the June 2013 Uttarakhand floods.

Haryana government has decided to allow mining in selected locations of the Aravalli mountain range and river bed of Yamuna to facilitate builders and stakeholders involved in the construction sector.

25. Lingambudhi Lake to be conserved as biodiversity hotspot

The Lingambudhi Lake,a major bird habitat in the city, is set to see better days as the Forest Department proposes to develop it on the lines of the Karanji Nature Park and conserve it as a biodiversity hotspot

26. Traditional knowledge on biodiversity in Telangana being gathered

In the fledgling Telangana State, the aged are being approached to find out from them traditional knowledge pertaining to medical plants and the richness of the bio-diversity in the areas.

As part of its corporate social responsibility, Bharat Heavy Electricals Limited has begun construction of biodigester toilet clusters in Haridwar.

About one third of Earth’s largest groundwater reserves are being rapidly depleted by human consumption, according to a new study led by the University of California, Irvine.

Faced with a rapidly changing habitat, polar bears are adapting with a new entrée.