Weekly green news roundup from across different media networks for week 34 (between Aug 17 to 23) 2015.

The city recorded the seventh-highest number of environment-related crimes in the country in 2014.

2. 20.8 Per Cent Green Cover in Delhi Due to Plantation: High Court

Forest cover in the national capital increased from six per cent in 1999 to 20.8 per cent in 2013 mainly due to plantation activity carried out in non-forest areas, the city government has told the Delhi High Court.

3. 40 rainwater harvesting structures to come up in Delhi: NDMC

The NDMC will come up with 40 rainwater harvesting structures at prime locations in Lutyen’s Delhi which will also help restore depleting groundwater table.

Joining the fight against air pollution in the city, over 500 students from 12 schools planted 3,200 saplings on the fifth and sixth days of TOI Green Drive just after Independence Day .

The National Green Tribunal on Thursday directed that no government project including flyovers and bridges will be approved until it’s stipulated in their tender documents that a rainwater harvesting system will also be developed on it.

6. Yamuna continues to bear the brunt

Despite the ITO Bridge being fenced with high railings, Delhiites have not stopped throwing puja items into the Yamuna.

With the August sun blazing, Prime Minister Narendra Modi announced last year from the ramparts of the Red Fort that his government’s mission would be to clean India by 2019.

Congestion and pollution are snuffing the life out of Delhi’s neighbourhoods, according to a new Centre for Science and Environment study on select south Delhi locations.

Delhi Government is mulling conducting the city’s first ever tree census with an aim to protect its green cover.

10. Should trucks be allowed in markets, NGT asks govt

National Green Tribunal on Monday asked the Delhi government if heavy diesel vehicles should be allowed to enter congested areas such as Chandni Chowk.

The National Green Tribunal on Tuesday directed the Ministry of Environment and Forests to issue within three weeks the final notification on the Eco-Sensitive Zone around the Okhla Bird sanctuary.

In a step aimed at minimising the traffic chaos in the capital, the National Green Tribunal on Tuesday directed all the municipal corporations in the city to ensure regulated parking on designated metalled roads in their areas.

The National Green Tribunal has pulled up BSES Yamuna for supplying electricity to industrial units located in Vishwas Nagar area here which are engaged in hazardous activities and causing pollution.

The National Green Tribunal has come down heavily on the Centre and the Delhi government for “demur and default” in implementing its orders on the revitalisation plan of Yamuna river.

15. Railways to set up first-of-its-kind waste plants in Delhi, Jaipur

Railways will be setting up first-of-its-kind plants at New Delhi and Jaipur stations for disposal of solid waste in environmental-friendly manner and generation of energy from the garbage.

16. Climate Action: India to spell out broad contour of its INDC on Monday; Prime Minister reviews the process

India will on Monday throw some light on the broad contour of its upcoming ‘climate action plan’ which the country would submit to the UN body on climate change in September.

In view of the high costs involved in cleaning up and inter-linking of rivers, the government is considering levying a charge on river water users and those polluting them.

18. NGT ban on taking vehicles to Rohtang relaxed till Nov 30

At a time when the BJP government at the Centre pitches hard for its ‘Namami Gange’ project, a bureaucrat from UP has attracted international attention for leading a public campaign in Saharanpur that eventually led to revival of a Ganga sub-tributary in the west UP district.

20. At NGT hearing, a war of words on plastic ban near Ganga

The National Green Tribunal saw heated arguments at its hearing convened on Tuesday in New Delhi pertaining to the ban on the use of plastic and polythene in Haridwar, which was openly flouted during the recently concluded kanwar yatra.

21. Coral reefs are ‘likely to disappear from the Earth’ despite climate change talks

Coral reefs, as they existed half a century ago, will likely disappear from Earth even if climate change talks in December are “wildly successful”, a distinguished professor and marine ecologist has warned.

The Sumatran rhino—one of the rarest rhino species—is now considered extinct in the wild in Malaysia, according to a study published this month.

How Natural Are Natural Disasters?

Mon Aug 24 , 2015
Natural disasters have affected 200 million people each year since 1990. Simran Arora discusses how these disasters may not as natural as we think they are. 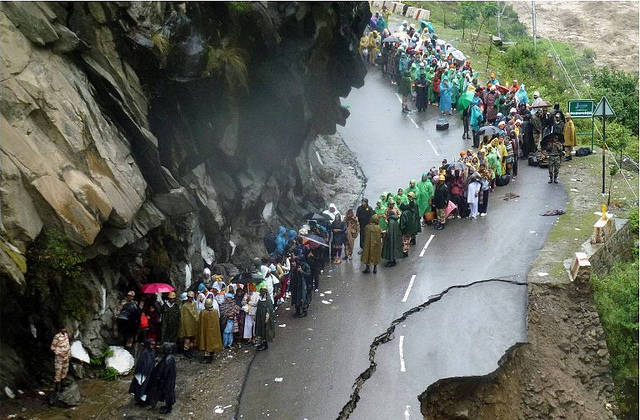