Weekly green news update from across different media networks for week 11 (between March 14 and 20) 2016.

With the odd-even scheme set to return from April 15, the Central government today played down its impact on air pollution, saying a single factor or action cannot substantially reduce pollution levels in the national capital.

The House seems to be divided against itself in the BJP-ruled North Delhi Municipal Corporation.

The Delhi Development Authority has prepared an action plan to develop a biodiversity park at Tughlakabad.

Concerned about disposal of bio-medical waste being generated in the capital, the Delhi Pollution Control Committee and the environment department of the Delhi government may soon involve more private companies in the process.

5. DJB to set up lab for disaster mgmt

Delhi Jal Board has decided to set up a disaster management lab where it will keep a tab on water quality, especially in case of emergencies like terrorist attacks, to neutralise threat to the city’s drinking water supply.

Residents of Delhi may well have to pay a green tax to save Yamuna if the Supreme Court decides to reverse its stay order of last October on the NGT decision for collection of a monthly environment compensation fee.

Art of Living founder Sri Sri Ravi Shankar on Wednesday said the clean-up of the Yamuna floodplains where the World Culture Festival was organised last week will take about a month.

The National Green Tribunal has fined three real estate firms Rs.1 lakh for cutting trees in Mangar village, located off Gurgaon-Faridabad road. Kenwood Mercantile and two other firms own over 400 acres in the Aravalli hills, including a substantial portion of the Mangar Bani.

Traffic chaos near the Kaushambi Bus Terminal on the Delhi border has caught the attention of the National Green Tribunal which on Monday called for an inspection of the area and sought a detailed report on the issue.

It’s a bright, breezy February morning and we’re getting into a fishing boat to try to spot some Olive Ridley sea turtles.

12. Earth Hour 2016: Cities turn off lights to call for action on climate change

Cities around Asia were turning out the lights Saturday evening to mark the 10th annual Earth Hour, a global movement dedicated to protecting the planet and highlighting the effects of climate change.

China on Saturday issued a yellow alert for smog as the pollution choked most regions in the country’s north with no signs of abating.

Mon Apr 4 , 2016
The Minister of State for Environment, Forest and Climate Change (MoEFCC) Shri Prakash Javadekar addressing at the seminar on COP 21- Building Synergies, Shaping Action” in Mumbai on April 02, 2016. 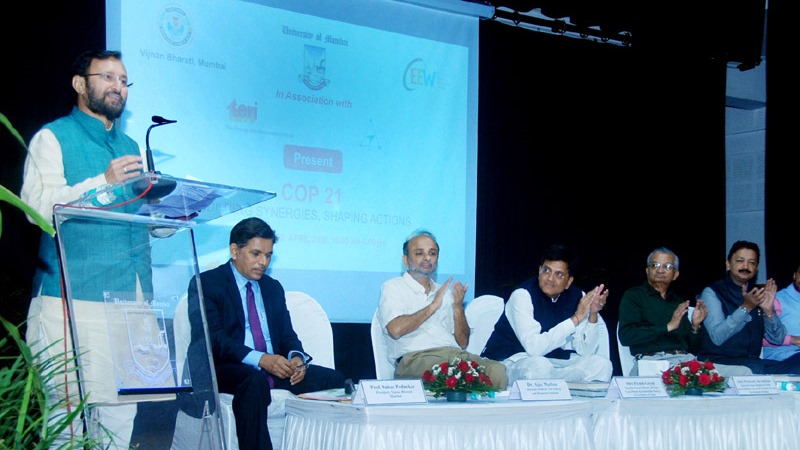