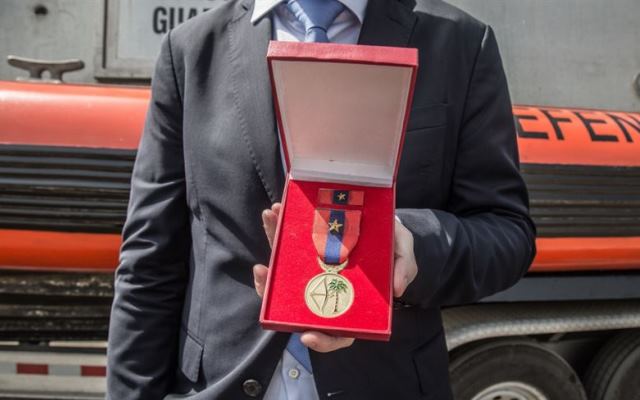 Sea Shepherd is an international non-profit marine conservation movement which was founded by Paul Watson in 1977. It has now become a worldwide movement with independent national and regional entities in over 20 countries, united by a common mission and a fleet of 11 ships on campaigns around the world.

On 11 February, Sea Shepherd was awarded the Distinguished Service Order (DSO) by the President of Liberia Dr. George Manneh Weah during the 62nd anniversary celebration of Armed Forces Day in Monrovia, the National Capital.

The DSO is the highest military award given by the Ministry of National Defense and the Armed Forces of Liberia, recognizing exceptional service to the Republic of Liberia. Captains Alex Cornelissen and Peter Hammarstedt, Sea Shepherd Global’s CEO and Director of Campaigns respectively, attended the conferment ceremony in Monrovia where Sea Shepherd was honoured for “the immense support and contribution in assisting the Liberian Coast Guard to fight against illegal, unreported and unregulated (IUU) fishing in Liberia”.

Since February 2017, Sea Shepherd had been working in partnership with Liberian authorities on joint at-sea patrols. This resulted in the arrest of 14 fishing vessels for illegal fishing and other fisheries crimes. Named Operation Sola Stella, the partnership was recognized in the official government citation that was read during the celebration:

This partnership has been especially successful by utilizing a mixed crew of international Sea Shepherd personnel, who operate the vessel, and Liberian Coast Guard sailors, with the authority to board, inspect and arrest vessels violating Liberia’s laws and regulations.

Accepting the DSO medal on behalf of Sea Shepherd, Captain Peter Hammarstedt said, “Liberia has emerged as a regional leader in the fight against illegal fishing and that is thanks to the visionary leadership of the Honorable Daniel D. Ziankahn Jr., Minister of National Defense, and Major General Prince Johnson III, Chief of Staff.”

Captain Alex Cornelissen added to this and said, “Sea Shepherd is incredibly proud of its partnership with the Ministry of National Defense and it is therefore a great, great honour to receive the DSO. To win the fight against illegal fishing, the world needs leaders. The past two years of cooperation has shown Sea Shepherd that the Liberian Coast Guard is leading the way”.