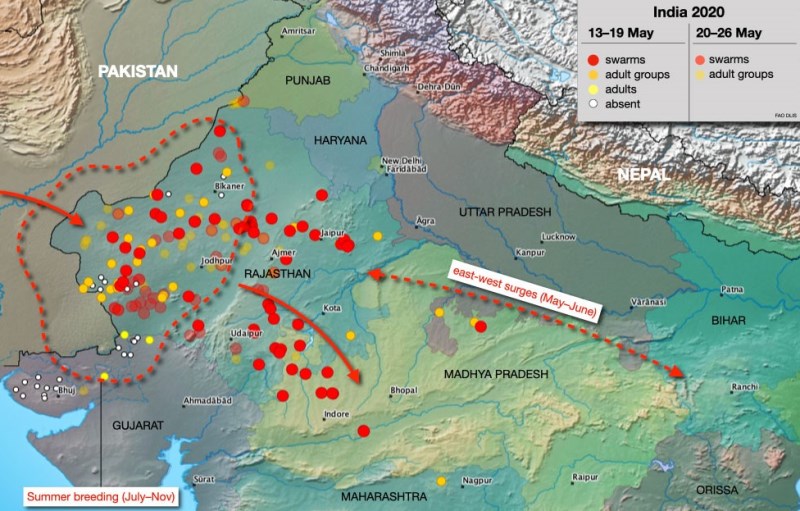 The year 2020 seems to be filled with unprecedented catastrophes. One after another, sudden damages and sufferings are giving tough time to people across the world. Already, there is much struggle due to the ongoing Coronavirus pandemic. Agricultural activities are hampered because of shortage of labour force and the economy is in turmoil. And now, the pest attack fro locusts is making the situation even more miserable for the farmers.

The attack from locusts swarms is not new. Desert Locust Plagues has a long history with records going back to 1874 in Kansas (USA) farms, where locusts caused damages worth $200 million. Ancient Greeks have talked about locusts in their testaments, Sanskrit poems written in 747 BC have also mentioned the locusts. There are carved images of locusts found in Sixth Dynasty (2420-2270 BC) tombs in Egypt.

Commonly misunderstood as grasshoppers, locusts are actually different from them in that they have the ability to change their behaviour. They can even migrate over large distances. Their life cycle involves three stages:

Interestingly, the life span of the locust depends entirely on weather and ecological conditions. They are therefore perhaps the most underrated indicators of climate change.

During favourable climatic conditions like moist sandy soil and bare areas, the female lays eggs. For the growth of hopper (nymph), green vegetation is required. They feed on leaves, shoots, flowers, fruits, seed, stem and bark. An adult locust can eat fresh food roughly as much as its own weight, i.e. 2 gram in a single day.

A desert locust exoskeleton is primarily composed of chitin. The production of chitin is a lifelong process and increases throughout the life of desert locust.

Why do locusts swarm?

Desert locusts prefer to live in dry regions. Many a times, less vegetation forces the the solitary locusts to live together and feed on whatever is left of the vegetation. This sudden crowding releases serotonin (a hormone that acts as neurotransmitter) in their central nervous systems. The released serotonin makes them more sociable and triggers rapid movement (swarming) in them.

During swarming, locusts have naturally inherited the ability to cover exceptionally large distances. According to available reports, swarms of locust are known to fly from North West Africa all the way to Great Britain and from West Africa to Caribbean, a distance of over 5000 km. They usually fly along the wind with an average speed of 15-20 kmph. A swarm of desert locusts flies during the day time and they rests during the night. The size of the swarm varies from less than 1 sq. km to several hundred square kilometers. Also, there can be 40 million to 80 million locusts in each sq. km.

Desert locusts are usually restricted to regions of Africa, East and South-west Asia. According to climate experts, due to global warming the air mass temperature has considerably increased. This led to trapping of excess heat in the Indian Ocean, which further led to disruption of the normal ocean cycles scientifically termed as the Indian Ocean Dipole.

This is a phenomenon where warm waters are concentrated in the western part of the ocean and cool waters in the south-eastern part. The disruption triggered an abnormal rainfall pattern this year and caused devastating floods in East African countries. All this provided fertile ground for locusts to breed in large number. 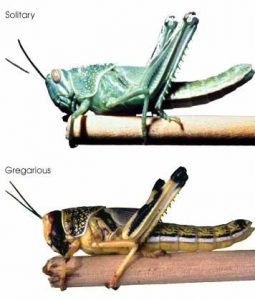 According to climate scientist R.M. Koll, unusually strong cyclonic storm in the Bay of Bengal and westerly winds strengthened the conditions for locusts to enter Yemen, Oman, Pakistan and India. Thus, it seems the climate colluded to not only increase locust population triggering their gregarious behaviorism and a swarm but also in determining their direction towards the Indian sub-continent.

The locusts are now arriving in large numbers in search of food. As already reported by Indian Express, the desert of Rajasthan will not satisfy their hunger. With few standing crops in the fields, the locust will be forced to move to other green spaces, parks and even to orange orchards near Nagpur.

According to the United Nations Food and Agricultural Organization (UN-FAO), “several successive waves of invasions can be expected until July in Rajasthan with eastward surges across northern India to as far as Bihar and Orissa.” However, it is predicted that after July, there would be westward movements of the swarms, when they will return to Rajasthan riding the changing winds associated with the southwest monsoon.

Should We Be Worried?

Locust do not attack humans and there is no evidence that they can be carriers of any viruses or diseases, much less the Coronavirus. But they can make the pandemic situation worse by threatening food security and causing starvation.

According to estimates, on an average a very small part of the locust swarm can eat vegetation equals to 10 elephants or 2,500 people in a single day. Apart from eating, they also damage the flowers, leaves, fruits and are also known to break down trees with their collective weight. Far from being helpful, their excreta actually spoil the plants and vegetation.

First of all, we need to understand the linkages that are creating favourable conditions locust swarms. Timely preventive management should be taken at places where outbreaks are first reported. The fact that some of these locations will be places in the underdeveloped and developing parts of Africa and Asia does not help. Some of the linkages are as follows:

According to UN-FAO, the best way to stop locusts from spreading is to spray small concentrated areas of locust population with pesticides. This is considered to be effective in the early days of the outbreak, when the insects are still multiplying.

What needs to be remembered here is that pesticides are toxic chemicals and therefore only the bio -pesticides should be recommended. Indiscriminate use of pesticides is not safe for other insect populations who performs essential services like pollination. Chemical pesticides are harmful also because the pesticide infested locust will be eaten by either predators or scavengers which will add these chemicals in our food chain.

In some countries, early warning system have been put in place to give prior location of locusts to farmers with the help of digital field tools. Apart from this, knowledge of weather conditions are also important in locust control operations. It will help in carrying out effective spraying.

In the end, the key to controlling locust swarms will lie in the coordination and cooperation between international governments and organizations. Like Covid-19, locust swarming is also a trans-boundary issue. Both viruses and locusts are governed by the laws of nature. For them, there are no political boundaries. Controlling locust swarms this year, and in the coming years is a combined responsibility of all the nations who need to come forward today and start finding a sustainable solutions to this recurring crisis.

Wed Jun 3 , 2020
The High Commission of Canada in India will be organising a Virtual Film Screening to celebrate World Environment Day 2020. 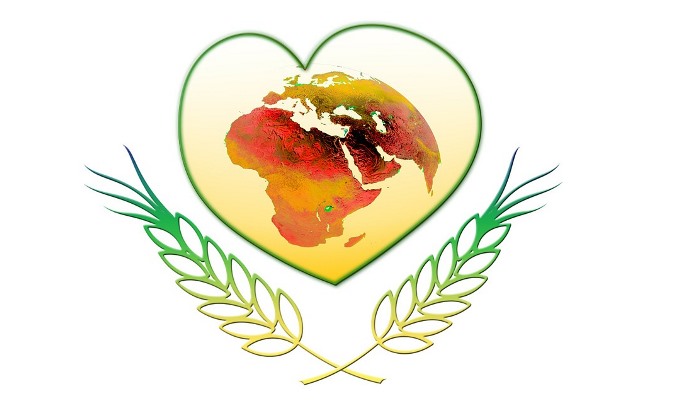