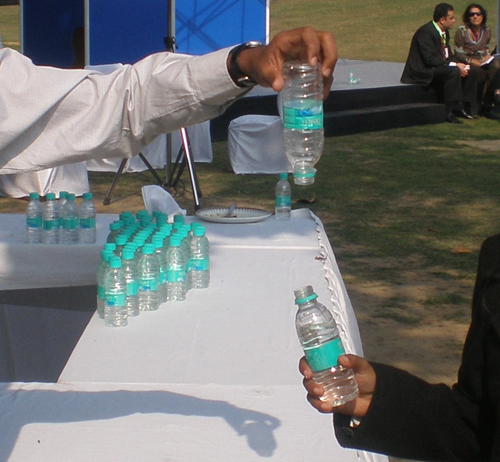 My vivid memory of Manmad–a township, due to major Railway junction in Maharashtra that I visited in the 60s–is that of early morning chaos, shouting and screaming over a common tap outside my uncle’s residence for collecting water. When I was growing up, the typical humorous short stories in my mother-tongue Marathi used to depict quarrels over common taps to collect water for domestic consumption in local communities, described as ‘Nala che Bhandan”. These stories were humorous portrayal of fights over water in local settings that began with minor issues. Jokes apart, this often led to communal tensions in real life. Typically, the water supply would last for two to three hours and water had to be collected and stored in that short span of time–one tap for twenty households.

I am sure similar scenarios exist in the villages and slums of Delhi as they do in parts of Patparganj. Delhi is an expanding city. We attract people in search of employment and new livelihood opportunities. This leads to additional population pressure and a much increased demand for fresh water. Then we settle in the city, get our families, and create wealth. Then expect to move into houses with bigger better bathrooms and taps, and an ever increasing demand for water. Typically, most of us migrated to Delhi either in this generation or in the past few generations.

This increasing water demand can be met only by a limited set of options like building more storage in dams and reservoirs, creating underground storage and transfer structures. Our city is mainly supplied by Yamuna river a perennial supply fed by the Himalayan Glaciers and we generously tap into ground water to augment it. These have yielded some positive results and also have potential for further extension. But there are inherent limitations to these strategies.

As if this was not enough, climate change has introduces a whole new dimension to the water challenge. The impact of climate change on rainfall patterns, river flows, dependent upon glacial melt and sea levels has only recently begun to be scientifically assessed with some degree of accuracy. Nevertheless, a recent report by the Intergovernmental Panel on Climate Change (IPCC) concludes that it is “very likely (a greater than 90 percent probability) that most river basins are likely to become drier leading to persistent water shortages.” Moreover, glacial melt that today supplies 80 percent of the dry season flow to the major northern rivers including Yamuna, could see this contribution reduced to 30 percent over the next 50 years, i.e in our life time.

So the possibility of a 24/7 water supply is going to remain a dream for most of us and we need to think of a new strategy to ensure that we have enough water for our consumption in the future. So what next?

One thought on “Water Sector Impacts of Climate Change: Part I”