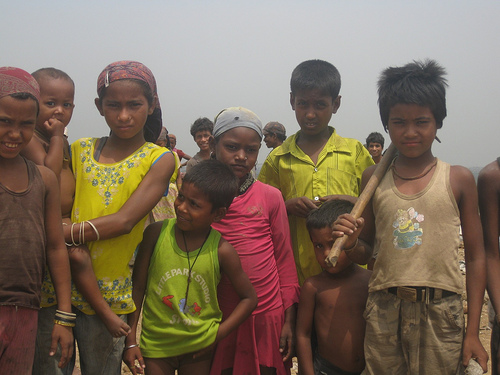 Socio-enviro-economic crisis: Children among ragpickers at the Okhla Landfill Site.

Waste to energy is essentially the process of generating electricity or heat from the direct burning of waste. The concept has been adequately exploited in developed countries and is known to be an environmentally considerate technology. Delhi’s first attempt at converting waste to energy was back in 1987.

The Ministry of Non-Conventional Energy Sources (MNES) commissioned the Timarpur Refuse Incineration-cum-Power Generation Station at a capital cost of Rs. 20 crores (US$ 4.4 million) in that year. The Plant is said to have not run for more than 21 days of trial operations due to the low calorific value of Delhi’s waste (600- 700 kcal/kg as against the required 1462.5 kcal/kg.

More recently, Delhi has constructed a functional power plant at Okhla and two more such Plants are expected to be functional by the end of 2013. The Okhla waste to energy power plant, which has a capacity of 16 MW and a consumption of approximately 1,950 tons per day of waste, has been a source of unwavering resistance and law suits from the Residents Welfare Association (RWA) of nearby Sukhdev Vihar.

The RWA also represents the rag pickers of Okhla area. The RWA filed their first petition against the private company running the plant at Okhla (Jindal Ecopolis) in 2009 and the litigation process of the same is still in progress after 27 hearings.

The cause of the uproar you may ask? The power plant is situated less than 150 meters from residential areas. Major hospitals, schools, bird sanctuaries and offices fall within a 10 km radius of the plant and are at full risk of the emissions of the plant. The plant also incinerates large amounts of mixed wastes largely including recyclable plastics and papers which are a valuable resource for rag pickers and workers in the much needed recycling industry.

In the developed world waste-to-energy plants confer numerous benefits to the city. Most of the waste that is reused for energy generation would probably go to a landfill. However, the plants aren’t without any drawbacks. For starters, there is a possibility of release of detrimental emissions like dioxins and furans which are the most toxic substances known to science (experimental proof results showing their cancer causing properties are accessible to interested public).

The source of these is the burning of mixed waste containing PVC plastics and paper bags which, Jindal Ecopolis has admitted on their website, is actually the nature of the waste the Plant is burning. Once released, dioxins persist in the environment and the risk of having these cancer causing agents in the environment needs to be critically analyzed. Particulate matter which causes lung diseases and congestive heart failure is also the primary concern of the inhabitants of the Okhla area.

Further, the bottom ash and emission of the power plants is also known to contain highly toxic heavy metals like Mercury, Lead and Cadmium. The National Green Tribunal (NGT) has received results from a study they ordered the Central Pollution Control Board (CPCB) to carry out during the last week of May.

This makes a clear case of emitting more than the permissible level of pollution by an industrial unit and the latter should be immediately shut down.

However, in their defense, Jindal Ecopolis claims that the Okhla plant has a state of the art zero emission pollution control technology. A claim thought to be fallible because the Okhla plant was built to produce 7,48,250 tons per year (TPY) of refuse derived fuel (RDF) at a total investment of 200 crores (US $44 million) in comparison to a German waste to energy incinerator that produces only 2,30,000 TPY of RDF with installed emission control technology at an initial investment of US $83 million.

Mixed views have arisen from the public which is being properly put across by the media. In spite of incessant protesting and continuing litigation process, the government still offers to support waste to energy projects in the coming financial year. This was evidenced by the statement of Finance Minister P Chidambaram who was reported to have said that government would support municipalities that implement waste-to-energy projects, through different instruments like viability gap funding, repayable grant and low-cost capital.

Commenting on dioxins and furan levels found, U C. Bahri a scientist and member of the panel has been reported to have said, “These are some of the most poisonous substances known to man; they leach into the soil, water and poison the entire ecosystem. In the US or Europe, the plant would be condemned and shut down immediately.”

Environment minister Jairam Ramesh, after visiting the Okhla power plant wrote to the Chief minister Govt. of NCT of Delhi, Sheila Dikshit stating that government did not carry out adequate public consultations before the project commenced (despite the public’s huge stake in this issue), and that Jindal Ecopolis did not get mandatory clearance from CPCB.

It should be noted here that the move to incinerate mixed waste for energy production is a direct blow to the budding recycling sector in Delhi. Over 15 million people earn a living from the waste processing industry. The rag pickers around Delhi who total approximately 1,00,000 are an unacknowledged asset to the Municipal Corporation of Delhi (MCD). Through their informal practice of waste collection and segregation, rag pickers recover about 1,600 tons of reusable material daily and save the MCD a whooping US $14,000 in daily operational costs.

One estimate suggests that the efforts of waste pickers translates to prevention of emission of about 962,133 tons of green house gases annually or 3.6 times more than what is saved by any waste project accruing carbon credits in India.

It can therefore be argued that the carbon credits being accrued to the controversial Okhla WTE power plant should more deservingly be transferred to the informal recycling sector. Implementation of policies to formalize this sector along with reinforcing waste segregation rules at the source will boost the recycling of waste, reduce the amount of plastics, metals and in-organics that get burnt, provide cheaper reusable raw materials and ultimately protect human health and the environment.

Incorporation of Bio-methanation along with composting technology to deal with Delhi’s largely organic waste would also be an economically viable option instead of having to augment the waste by addition of PVC plastics and polythene bags to increase its calorific value. A greener option here is a more inclusive option, which is definitely also a more sustainable option.

Simon hails from Nairobi, Kenya and completed his Master's in Environmental Studies from the University of Delhi. He was a Summer Intern at Delhi Greens during 2013 and was part of the Research for People initiative.