Why Vultures Matter? Part I 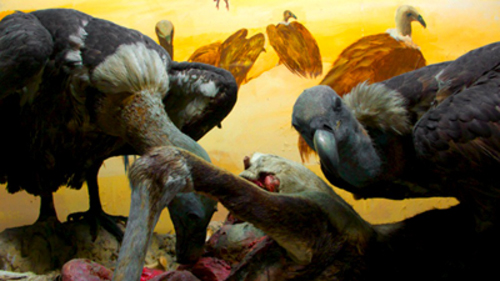 Wish you all a Happy ‘Green and Blue’ New Year. Why focus on an environment friendly new year or specifically, what are we dealing with when we talk of climate change? At a very basic level it is ‘Fear of Death’. It is a primal fear that we all have, because we are human beings and like all living things are designed to fear death.

Various ways in which one could die, due to accidents, due to disease, due to age etc. While the fear of dieing alone is very genuine, we can always die believing that we continue to live after our death in some one else’s memory, gene pool or we are reborn….what ever you believe in. Genocide is a higher order fear of death and the highest order is annihilation of the species. (Hence we are worried about Vultures….)

The fear of mass death leaving behind no progeny, no one to take the family name, no living legacy, just some artifacts discovered by some one hunting or digging, like Egyptian or Inca civilizations or Mohenjo-Daro and Harappa civilizations, nearer home.

This is in the past, more nearer in time in recent history, we had genocide of the Jews in World War II, the atom-bomb and the fear of the nuclear holocaust, HIV/AIDS pandemic,and more recently Bird flue in SE Asia and spreading. ‘Climate change’ gets added to it.

But what IPCC has done – once and for all – has converted the ‘fear of failure of cities’ as a ‘some day’ event into a distant future to be debated in different forums, into a ‘reality’ right here right now. Failure of cities as we know it, is happening in the present, in fixed number of years. If we do nothing, it predicts that future of human civilization – as 90% people living in mega-cities is not going to happen.

Mega cities are tall buildings, high tech production centers, cyber entertainment and fast moving vehicles, etc. which most people living in small towns and villages aspired to have for themselves and their lives. Instead what we are likely to have is death of urban civilization, as we know it. That leaves us in a space of uncertainty. What will we become? What will we have? What should we do? in the face of uncertainty, always leaves us in a state of fear and anxiety and tension.

How does one respond to a ‘run away train’ of climate change? Either wait for it to crash or try to apply breaks to slow it down and hope it will eventually stop before it crashes. IPCC has suggested that we start applying breaks and fast by suggesting actions at various levels individual, community, institutions, governments, providing funds, applying knowledge, technology to reduce risk and find new solutions and fast.

2 thoughts on “Why Vultures Matter? Part I”

Views: 9,597
Share this ArticleLike this article? Email it to a friend!
Email sent!