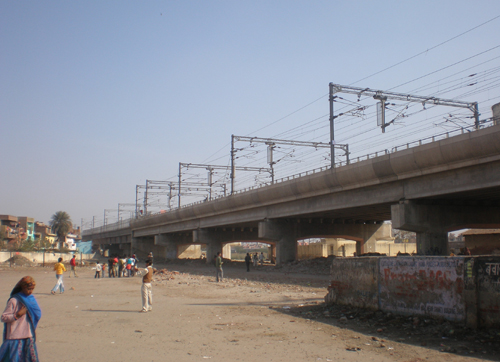 Last time we looked at the incredible paced up infrastructure development taking place in Delhi over the recent past in lieu of the Commonwealth Games. We have a new drinking water supply system–Sonia Vihar– providing water to the eastern part of city. We have new sewage system put in place across the city by the authorities. We have an entirely new network of roads and flyovers connecting the city with Domestic and International Terminals. Gurgaon and Jaipur have come closer. We have the Delhi Metro Railway System in place connecting and criss-crossing the Delhi NCR region.

We have renewed focus on solid waste management by local authorities though the Bhagidari scheme. We have put in place over the last few years, airport beautification and expansion, both for domestic and international terminals. We have the existing Indian Railway connecting Delhi to all corners of the country through Rajdhani networks. New sports complexes have come up and existing stadiums renewed.

Then there are the Department of Environment advertisements, showcasing Delhi to be a clean and green city, which has banned the use of plastic bags, which is meeting a good consumer response. Posters of hygienic municipal hazardous waste disposal system for hospital waste are also seen at places. Most recently, the city has seen the Bed and Breakfast possibility in residential area for hosting the guests coming into the city. Construction of the Commonwealth Games Village is on right now and it promises of making the houses available as cheap housing for residents after the Games are over.

I had argued earlier that in the context of the conversation that constitutes the agreement about success of the Commonwealth Games, there is consensus by authority, on the success of the CWG to take place in Delhi in one and a half years time. Each of us will be impacted by it no doubt. The intention is to understand the impact of the Games on the individual, the group or the community in our society that may have left unnoticed in the planning of the CWG. We should also hgave the courage to be insightfully truthful of the real cost, be it socio-economic, cultural, religious, personal, of the success of CWG 2010 and the benefits of hosting such a world event in the face of a global recession.

We must also appreciate the context from which the resistance to the Games is being posed and by whom. All this should be taken into account. This would allow us to choose or not to choose, to take actions that are more environment friendly, people friendly and technologically efficient. It goes without saying that the middle class will definitely stand to benefit the maximum out of the service contracts, the infrastructure constructed, the services delivered, through tourism, development of transport, IT, SWM or hospital waste treatment or Bhagidari scheme or bread and breakfast facilities, you name it. And that could not always be good for an inclusive urban development.

This post has been revised since it was first written.

32 thoughts on “Benefits of Commonwealth Games”

Views: 26,805
Share this ArticleLike this article? Email it to a friend!
Email sent!