DIVERSEEDS – a European scientific project of the IDC and supported by the European Commission’s 6th framework programme on “Networking on conservation and use of plant genetic resources in Europe and Asia” has just released the diverseeds documentary film!

The 50 mins documentary film shows the importance of agricultural biodiversity for food and agriculture, with astonishing pictures from Europe and South East Asia/ China. 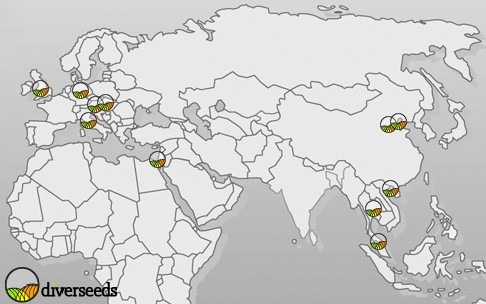 In agriculture, the widespread adoption of a few improved varieties has narrowed the genetic base of important food crops and led to the disappearance of hundreds of landraces. Conserving and using plant genetic diversity is vital in meeting the world’s future development needs in Europe, Asia and elsewhere. This documentary shows why biodiversity is important for agriculture and how it is conserved and used in many different locations in Europe and in South East Asia/ China.

The production of the film was part of the activities carried out in the 2-year EC funded project DIVERSEEDS. The film can be used to explain the importance of plant genetic resources to farmers, students, high school students, government officials, funding agencies or the general public.

Click here to watch parts of the film online and to purchase. You can also order your copy of the film DVD by writing to dvd@diverseeds.eu

One thought on “Diverseeds: Genetic Resources for Food & Agriculture”

Views: 7,440
Share this ArticleLike this article? Email it to a friend!
Email sent!