On Gandhi Jayanthi, Remembering the Mahatma to Resurrect His Principles 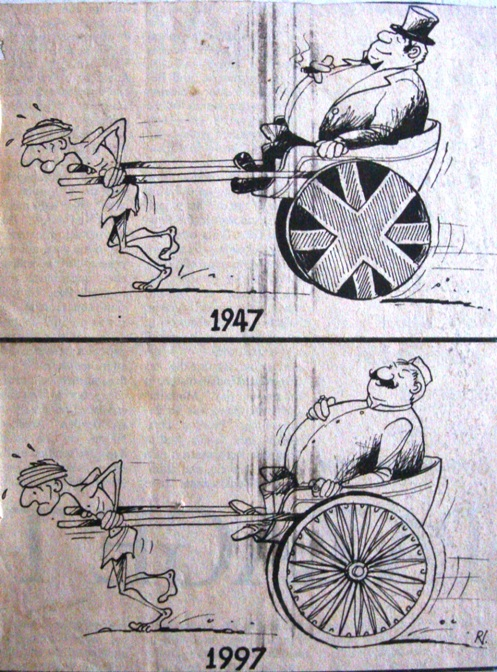 An over 12 year old cartoon that featured in the national media to mark 50 years of India’s independence: the situation is as grim

Panchayati Raj, local self governance, uncompromising non-violence, power to the people, simple living-high thinking – just a few of the the attributes of this sustainable development pioneer: Delhi Greens wishes Mahatma Gandhi – Father of the Nation and Peacemaker of the World – a very Happy Birthday!

Not only are Gandhi’s principles used as punchlines for all environmental activism in the present day, his teachings were a pre-cursor to laying the very foundation of the concept of sustainable development.

“God forbid that India should ever take to industrialization after the manner of the West,” he had said. “The economic imperialism of a single tiny island kingdom (England) is today keeping the world in chains. If an entire nation of 300 million took to similar economic exploitation, it would strip the world bare like locusts.

A warning long forgotten yet as important today as it was back then. Thus the need of the hour today – a need that gets more urgent each passing day – is but to revive those principles to ensure freedom from exploitation of nature, poverty and attain neo-independence.

One thought on “On Gandhi Jayanthi, Remembering the Mahatma to Resurrect His Principles”

Views: 11,372
Share this ArticleLike this article? Email it to a friend!
Email sent!