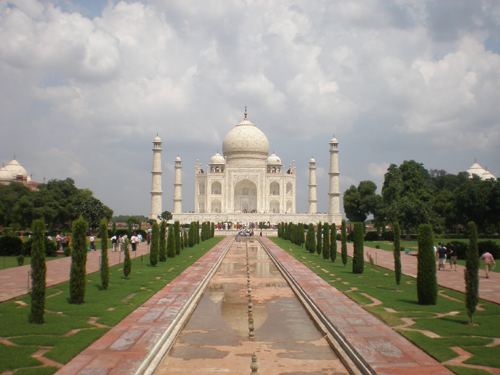 The Taj Mahal: A resource curse in the ‘heart’ of India?

Mention or lack of mention of just one word makes a difference. Thank you for appreciating the film review with ‘Beautiful.’

I had the privilege of being present in an awesome event in Agra. Empirical facts indicated that of the 378 settlements that can be classified as slums, one slum settlement with about 400 households was successful in having 94 twin pit latrine with pour flush in the city. It took the community and the NGO working with them together over three year to achieve this. So the question is, whether it is worth the time, money and efforts that went into this project?

The short answer: the context that this community comes from is what is makes the effort totally worth it.

The long answer requires a brief peek into history. Villages in Utter Pradesh easily cover over a 5 to 7 km radius and are relatively spread out. They have three to five satellite settlements typically inhabited by the Scheduled Castes. The ‘East of Yamuna’ whether it was for Delhi or Agra, is where the Mughal Empire never ‘looked.’ This continues to be the situation with the present day city governance in Agra. Benefits of international tourism do not reach these settlements, and only causes major problems of transport and housing. The relative difference in the lifestyle of visiting national or international tourists and the inhabitants of Agra is very stark. Additionally the city benefits very little from their revenues and their spending. So the people of Agra look upon the Taj Mahal as a curse rather than beauty.

Slums in the east of Agra are not really ‘the urban slums’ created by first generation migrants coming into the city in search of livelihood, but a village satellite that has got included in the expanding city of Agra. And unlike urban slums, where the land ownership is with the city, 87% the house owners own the land too. The Cross Cutting Agra Project facilitated the setting up of 94 toilets in the households, paved roads within the settlement and cleaning up of the lanes to make it more walkable and tourist friendly. The livelihood generation activities set up by Self Help Groups (SHGs) over the last three years, are now paying off. The village is on the ‘tourist map.’ Tourists visit the village, shop and have tea here. They spend time appreciating the rural view of Taj Mahal, across the river, through the forest. For once, lack of mention of just one word “caste” makes a difference.

One thought on “Cross Cutting Agra”

Views: 6,614
Share this ArticleLike this article? Email it to a friend!
Email sent!