Learning to Look at the Larger Picture 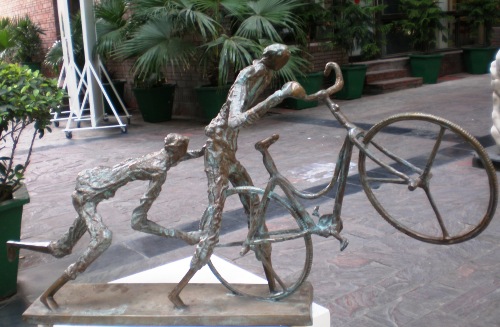 200 mosquitoes swarmed into our bedroom last night. Some of them also managed to get into our mosquito net which meant a sleepless night. The impact it had on our lives was upsetting and bad tempers. Our local society is complaining that ever since the Delhi Metro work began in our neighborhood, it has interfered with the ecological balance of the system we live in. We have had more malaria infections and more irritating nights. Eventually, the property prices of our neighborhood may well get affected.

This way of being helpless and victimized allows us to find faults with the others without looking at what we are getting out of it. We are all going to be better off as a city infrastructure improves due to the growth in the city. The Delhi Metro is, after all, a major infrastructure investments in the transport sector.

It is easy to blame the Delhi Government, the Metro authorities, and most favorite of them all the Commonwealth Games or whoever we can think of. What is missing is taking responsibility for what is happening in our neighborhood. Not as a blame or fault but as a grace we give ourselves.

The city has grown really fast and really wide in all directions. What the city planners and economists have been hinting at is that it is time we take into account the needs of the young generation and the commuters with jobs in various sector across the NCR. Without a mass transport system that is clean attractive and efficient, not to mention stylish and environment friendly, the majority of the commuters we will not be prefer to use it.

When the media criticized the BRT system, the people who registered their complaints were mainly the car owners while the people who were getting the benefit were the daily commuters dependent on mass transport. After all, it was the BRT not a CRT.

The possibility of a world class city growing to support the national economy is the possibility that is both exciting and empowering. That is what we need to look at instead small problems of micro-ecological balance, which upsets the insect population.

https://www.instagram.com/delhigreens/feed/
Views: 3,449
Share this ArticleLike this article? Email it to a friend!
Email sent!