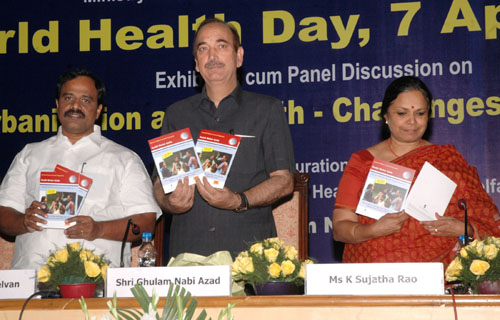 Virtually all population growth over the next 30 years will be in urban areas, signaling that urbanization is here to stay. It is associated with many health challenges related to water, environment, violence and injury, non-communicable diseases (NCDs) and their risk factors like tobacco use, unhealthy diets, physical inactivity, harmful use of alcohol as well as the risks associated with disease outbreaks. Urbanization is therefore a major challenge faced by the world today.

With this as the backdrop, the WHO themed the World Health today around its campaign “1000 cities, 1000 lives”, events which is being organized worldwide during the week of 7 – 11 April 2010.

The global goals of the campaign are:

Urban planning can promote healthy behaviours and safety through investment in active transport, designing areas to promote physical activity and passing regulatory controls on tobacco and food safety. Improving urban living conditions in the areas of housing, water and sanitation will go a long way to mitigating health risks. Building inclusive cities that are accessible and age-friendly will benefit all urban residents. However, all this requires great determination from the side of the Governments and decision makers.

In a report titled ‘The urban environment and health: Delhi stands up to the challenge”, the WHO congratulated the city of Delhi today, for taking the right step of running commercial vehicles on Compressed Natural Gas (CNG). This, the report suggests, has brought down the urban pollution load considerably.

Speaking on the challenges of urbanization and health, the Union Minister of Health and Family Welfare Shri Ghulam Nabi Azad said that while the country is still dealing with communicable diseases, burden of non communicable diseases (NCDs) is assuming menacing proportion. He emphasized the need to focus on chewing tobacco and gutka in the fight against tobacco.

Shri Azad further stated that while attention is centered on cigarettes, those chewing tobacco products are going scot free. “India also shares the highest burden of oral cancer in the world due to consumption of chewing tobacco” he conluded.

Views: 4,371
Share this ArticleLike this article? Email it to a friend!
Email sent!