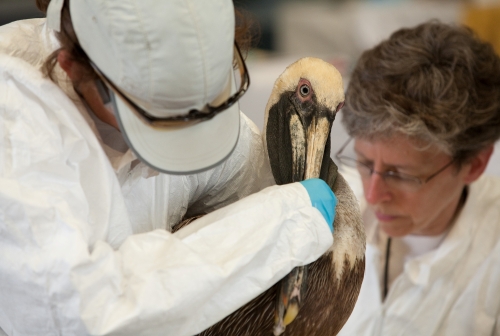 A Veterinarian at Tri-State Bird Rescue examines a brown pelican as response work to the Gulf of Mexico episode. Image © BP p.l.c.

“Aaww…it hurts!!”…that’s what I thought the earth would say to the entire disturbing phenomenon happening on it. Recently breaking news from the US broke my heart and I believed many others who love nature. British Petroleum (BP), one of the world’s largest energy companies, providing its customers with fuel for transportation, energy for heat and light, retail services and petrochemicals products for everyday items, became the culprit of environmental havoc in the Gulf of Mexico. 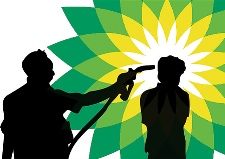 The scariest news is about the unpredictable impacts of the disaster, the cost and time to recover from it. No wonder, BP’s chief executive didn’t know what or who could challenge their future plans during his discussion as part of the information reviewed and reported on by Ernst & Young (as part of BP’s 2009 sustainability reporting).

“Q. So, what is BP doing to meet future energy demand for oil and gas?

Tony: Our analysis indicates the world has enough proved reserves to last for about 40 years for oil and 60 years for gas, at today’s consumption rates. There is also a lot more oil and gas to find – but it requires working at the industry’s frontiers and continuing to innovate in our technology and processes, as indeed BP has done through its 100 year history. Our progress in deepwater exploration is a good example. Last year we made the Tiber discovery more than ten kilometers beneath the Gulf of Mexico. That’s further below sea level than the top of Mount Everest is above it.

That oil is in a geological layer, the lower tertiary, which we are only now starting to map and understand. We are also pioneering new technologies – such as digital imaging of reservoirs and advanced drilling techniques – to access gas that is locked in dense rock formations. We’re also getting more oil and gas out of mature fields. The average recovery rate from a reservoir is about 35%, but in our Prudhoe Bay development in Alaska we now expect to recover around 60% of the oil as a result of our enhanced oil recovery processes. “

One reporter has creatively termed the havoc as an “Oil Volcano” likening it to magma coming out of the earth which cannot be stopped. Talking of volcano, the recent horrific Icelandic volcano haunts my mind again. The volcano which remained dormant for 200 years finally erupted ripping a 1 km-long fissure in a field of ice. The volcano released lava a hundred meters high, Icelandic airspace was closed, flights operation was disrupted, many roads were forced to close and around 500 people were moved from the area. Till now there isn’t any exact calculation on the environmental impacts of the eruption.

Closer home, the past week has added more disturbing events relating to environment on the list. With shock and disbelief, I read the news which reports that Cobalt 60 radiation has claimed one life while others are battling in city hospitals. The giant is hunting down every possible opportunity to release its fear and warning signals. What adds to my mourning for nature is the final disclosure of the cobalt culprit. Radioactive material Cobalt-60 was reported to be disposed from the Department of Chemistry, University of Delhi!! Oouuchh…that hurts. Believing that students and teachers and so called learned are suppose to be actually living up to what they learn and preach, the shameful case leaves us no option but gear ourselves for self defense.

After all these disastrous news, am pretty sure now that you can assuredly sing along with me – “Bhaiyaa aal izz NOT well, Aree Chaachu all izz NOT well AT ALL”. However besides singing we can contribute our part to make sure that it doesn’t happen again by raising our voice and unite in a common purpose like working towards a better clean-energy future and above all keeping your commitment in saving the environment starting from where opportunities welcome you!

Is anyone listening? Do I see eyebrows rising and hearts being committed to the noble cause…? It’s your duty today to gain tomorrow.

Views: 3,850
Share this ArticleLike this article? Email it to a friend!
Email sent!