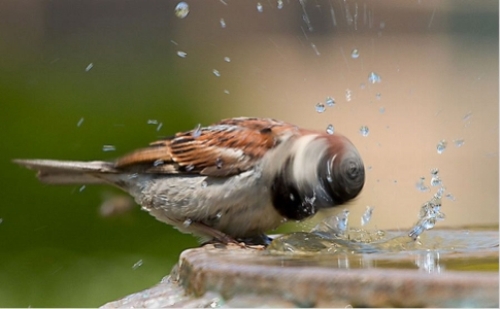 I fully agreed to the saying that “Nobody can do everything, but everyone can do something”. Delhi’s summer has been hunting down inhabitants of the city with its merciless and scorching heat. Mercury has been rising alarmingly and we see less hope of respite to soothe the heat. The joy of drinking cold chilled water in this summer is incomparable to any flirting taste of food.

We, who know how to enjoy and be glad of such natural respite like water, carry the responsibility of sharing it with our co-inhabitants on the Planet. Our small chirping friends are being hunted down by the heat everywhere and their survival is being threatened by lack of water resource in the city. Except for some birding areas in and around Delhi, birds that dare fly beyond the border have paid the price of visiting us.

Some of the birding areas in and around Delhi include places like the Yamuna, YBP, Okhla, Tughlaqabad, the Ridge, the Asola Sanctuary,  Badhkal Lake as well as some of Delhi’s parks and other green areas. Unlike these well-maintained places, the rest of the city is under the spell of urban development. The construction works going on in full swing for decorating Delhi and making it presentable during the much awaited Commonwealth Games 2010 has left few sources of open water supply to Delhi’s bird population.

As our friend Sujata Chatterji commented on our blog to share her concern and we couldn’t agree more to what she says, “Leaving a little bowl of water outside your homes can go a long way in quenching the thirst of the birds in this harsh summer. It’s not so difficult to do but can mean so much for our little feathered friends.” Indeed a thoughtful deed as such will go a long way to save some precious birds and show our hospitality towards our co-inhabitants. After all they deserve such courtesy for all the chirping songs and melody they add to our everyday live. How true…A friend in need is a friend indeed!

Views: 23,405
Share this ArticleLike this article? Email it to a friend!
Email sent!