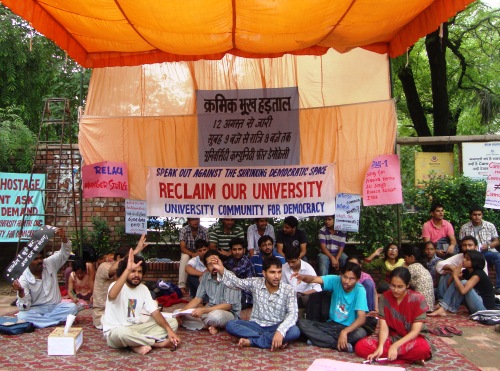 The University Community for Democracy (UCD), an independent forum setup to speak out against the shrinking democratic space has initiating a relay hunger strike from 9 am to 9 pm, starting 12th August, 2010. This is taking place at  Arts Faculty Main gate (Opp. Science Faculty), North Campus. Each day there will be five people (teachers, students and researchers) who will be on a hunger strike, as well as many others who will sit in solidarity with them.

The UCD has been challenging a number of decisions taken by both Delhi University and the Delhi Government with regard to the Commonwealth Games 2010 for over a month now. The Forum is deeply concerned by the gross violations of rights that the city has witnessed in the name of the Games and condemns the irresponsible manner in which Delhi is being prepared for this mega- event.

For the organization of the CWG 2010 in October, the University of Delhi authorities has had the university hostels vacated for using as guest rooms during the Games. The hostels are now being renovated for the Games and are out of bound for students. This has caused immense worry and discomfort for the students, especially the girl candidates for whom its not just about finding alternate suitable accommodation but also their safety and security.

The issue is even more intense for the fact that the Games have come with a lot of controversy, scams and irresponsibility. There is no other bright side that we are now looking forward to. There is no pride left in sacrificing for the country for the success of the Games, for there is nothing left to feel proud of. On the contrary, the Games have become the most embarrassing international incidence for the country, that came just a week before India’s Independence Day.

2 thoughts on “DU Students Protest Against the Commonwealth Games”

Views: 5,623
Share this ArticleLike this article? Email it to a friend!
Email sent!