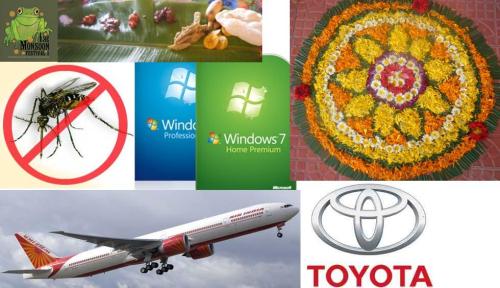 The Monsoon this year has been prolonged and undoubtedly it provides an interesting platform to comprehend the way we interact and associate with environment and seasonal change, how our lifestyles revolve around seasons and how certain patterns of climatic culture evolve over a period of time. Tagged with the word ‘monsoon’, various activities and events are carried out that relates different stories and different aspects of people’s lifestyle. Very briefly, the following post will cruise through some of the interesting aspects we found this monsoon.

Seasonal terminology is common in the Indian sub-continent with regard to the changing seasons. The Parliament Session during July every year has long been referred to as the ‘Monsoon session’.  This year the monsoon session of India’s parliament commenced on July 26 and concluded on August 31, with 26 sittings spread over 37 days. Considering that Delhi grilled under the heat wave longer this year, the wait for the splashing monsoon excited many minds and gave birth to several ways and reasons to celebrate its arrival.

Since Monsoon comes as the ‘rainy season’ right after the summer season it gives relief from the scorching heat. Windows LifeStyle considered this worth of celebrations. The company celebrated the starting of Monsoon, which brings the joy of happiness and fraternity among the people of India, by giving away lots of Microsoft Office 2010 and Windows 7 Genuine License Keys to its readers and followers across the world.

When Monsoon struck the capital, the dripping days and nights call for revelry and festivities. Jumping on this opportunity, the Indian Council for Cultural Relations (ICCR) organised the ‘Malhaar’ festival on 23rd and 24th of August, 2010 at Azad Bhavan Auditorium, I.P Estate, New Delhi. The festival was aimed at celebrating the spirit of monsoon with dance and music. The two day event showcased the light classical Kathak, Sarangi and Sitar performances to set the mood. Various forms of music and art evolve around seasons and is best described in Shashi Vyas’s words, “Indian classical music has a strong relationship with the seasons. There are ragas and musical compositions that fit the different moods, and the concert aims to showcase them”.

Picture can sometimes best tell a story and keeping this in mind, Gallery Indraprastha hosted ‘Summer And Monsoon’ – a group show of paintings by young and eminent artists. Changes in seasons and climate, its effect on human behaviour was scanned in this group show that reflected Indian contemporary art. Some of the paintings portray moods revealed by nature in all its nuances, from the gentle quivering of leaves in a light evening breeze to the majesty of a monsoon storm. The canvases in various colours – some rain drenched and bathed in dappled sunlight, others portrayed human thoughts, expressions and moods with the changing seasons.

Exploring places that are best blessed by monsoon is a seasonal ritual for many who love to travel and for those who desire to get away from the city’s calculated routine to meditate and relax. Tapping the faithful and adventurous travellers, Air India recently announced its Special Monsoon Fares. Passenger paying economy class fare in the domestic sector will be allowed to travel in executive class. The special fare is valid till September 30. Passengers paying full economy class fare can either get an upgrade under Monsoon special offer or avail the companion offer for travel in economy class. The airline has also introduced a super-saver ticket under which a four coupon economy class ticket at a cost of Rs, 21,328 (inclusive of taxes) is issued for travel on all domestic sectors. So much for greenhouse gas emissions!

To make the Monsoon getaway even more memorable and worth taking, many hotels and travel companies offer attractive travel packages. One such party, Leisure Hotels offered attractive packages and discounts this monsoon at some of its luxury resorts at popular hill stations in Uttarakhand – Vishranti in Dehradun, The Naini Retreat in Nainital and The Riverview Retreat in Corbett National Park.

A marketing strategy that many companies follow yearly and bank upon to draw customers is again seasonal. With the onset of the ‘rainy season’, companies start their Monsoon festival, often a discount offer. Ezone held its Monsoon Offers under the banner ‘Monsoon carefree’ and gave discounts on its products. Toyota Kirloskar Motors also has announced a new ‘monsoon campaign’ to provide seasonal as well as  general  maintenance to its customers across India.  The campaign  started on 1st of June and continued till the end of August. During this campaign, the company gave free exclusive 20 Points Monsoon Check Up to vehicles of Toyota customers. Besides this, the campaign offered a basket full of goodies including Lucky Draw Prizes, Special Discounts, assured gifts and a number of packages.

When it comes to lifestyle, one cannot miss the topic which is so close to our heart and stomach. Food is closely associated with culture and evolving food menu has been a ritual closely related to seasons.What the season has brought forth for us limits our choice but enhances our eating habits. Monsoon in India, a primarily agrarian country, is considered a season of abundance, fertility, and hence from time immemorial its a season that calls for celebrations. No doubt this spirit is prominent to many festivals weaved around the season like Teej, Ganpati, Rakshabandhan and Onam.

Keeping this tradition of food and the festive spirit alive are many restaurants and hotels across Delhi that host Monsoon food festivals. The Park had conducted ‘The Monsoon Cuisine-Art festival’ till August 1 in the capital. Marbellas, Tivoli Garden Resort Hotel raised a toast with traditional drinks served with authentic Punjabi and Indian meals to welcome the onset of saavan!

In the midst of monsoon excitement and celebrations sweeping across the city, the red alert sign hovered high in the health sector. Seasonal associated disease like malaria, dengue, viral fever and typhoid are keeping the city’s hospital beds full and many health experts hands tied. The city is currently witnessing one of the worst dengue menace with the number of cases crossing 1,000 and many more patients testing positive for the vector-borne disease. Most of the cases has been shockingly reported from posh areas of the capital especially in South Delhi like Vasant Kunj, Greater Kailash, New Friends Colony, etc. The Commonwealth Games construction sites have been reported to be providing some of the best breeding grounds for the disease causing mosquitoes.

To the disappointment of many, the health sector hasn’t announced any monsoon discount or special offer on treatment. The sector most likely didn’t find any reason good enough to celebrate the onset of Monsoon. For many doctors and hospital workers, monsoon has proved to be one of the busiest season and a tough challenge. Fighting and warning the seasonal illness, many health magazines and periodicals are talking about Monsoon related health issues and preventive measures.

Last but not the least, the environmental aspect to the Monsoon celebration cannot be ignored. Red Earth held ‘The Monsoon Festival 5’, and to commemorate the year of the Genda Phool in Delhi, the festival was themed on the magical marigold flower. The festival celebrated the central ideas of TGPP – plantation, greenery, water: an environmental connect, and the multifarious and magical universe of the marigold flower with the conglomeration of Monsoon 2010 in Delhi. This years festival saw a unique change and inclination towards environmental issues.

Through the festival, efforts were made and events were organised to save the monsoon, genda phool and to raise our voice as citizens against what is happening to Delhi in 2010; to raise issues of urban heritage and development, right to livelihood and issues of displacement, to re-assert our right as citizens to participate in the development initiatives planned for our city and to support all the other ideas that we believe in together – as a community of citizens.

2 thoughts on “Recording Urban Lifestyle During Monsoon in Delhi”

Views: 6,452
Share this ArticleLike this article? Email it to a friend!
Email sent!