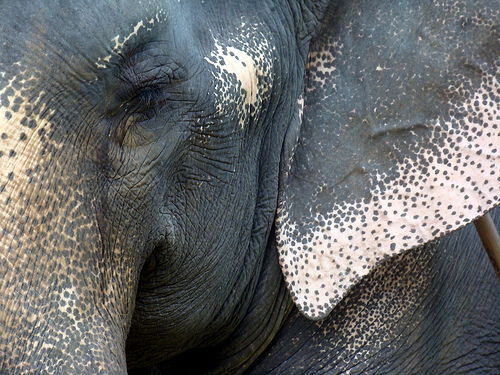 The killing of elephants on railway tracks in West Bengal made headlines recently. On 22nd September, seven elephants including one calf were mowed down by a Guwahati bound goods train near Moraghat level crossing around midnight. The railway track in question passes through an elephant corridor which, according to the Forest Department’s Expert Committee, was not considered as accident prone area. Consequently and as indicated by the scale of casualty, the train was moving with a speed much higher than the permissible speed limit of 25 kmph. The Railway authorities later confirmed the speed of the train at the time of the accident to be 70 kmph.

The tragic incident has sent shock waves across the conservation community in India. The incident has brought into attention the threat posed by the trains to the elephant population in the country. In the aftermath of this accident, the MoEF blamed Ministry of Railways for not having complied with the permissible speed limit for a zone as sensitive as this.

India is estimated to have about 25,000-27,000 elephants which constitutes 60% of the total population of elephants in Asia. Presently, the country is losing its elephant population annually due to the increasing cases of train hits, large scale habitat destruction, loss of habitat quality, fragmentation, conflict with human and ivory poaching. Out of the estimated Indian population around 3500 are domesticated for temple rituals, procession and other human uses. According to the recently released Elephant Task Force (ETF) report, the country has lost a total of 150 elephants due to train hits. The highest casualties have been recorded in two states of Assam and West Bengal which constitute 36% and 26% respectively of the entire cases.

Wildlife biologists explain that elephants pass through railway tracks in search of water and farmland. Raman Sukumar, one of the renowned elephant biologists has noted in one of his books that in India, 18% of the female elephant deaths and 70% of male elephant deaths are directly due to man. Illegal poaching of male elephants for ivory trade has resulted in a skewed gender ratio of elephant population in the country. The Government of India had launched Project Elephant in the year 1992, in order to protect elephants, their habitat and corridors and to address human wildlife conflict.

Only a month ago, a 12 member task force was set up by the MoEF to look into the matters of elephant conservation in India. This ETF, led by the prominent environmental historian Mahesh Rangarajan, submitted its report in August. The issue of train mishaps has been discussed in the task force report in detail. A study conducted by Wildlife Trust of India found high temperature and uneven water source as the main factor that leads elephants to pass through the railway tracks.

Other factors contributing to elephant mortality by train hits, according to the ETF report, include ecological (food, water, shelter, vegetation and movement of elephants), physical (steep embankments and turning), technical factors (speed of train, frequency and time, unmanaged disposal of the edible waste and garbage) and lack of awareness of among drivers, passengers and planners. A general lack of coordination between the Railways and the Forest Department is the reason for lack of any sustained mitigation measure.

On the recommendation of Wildlife Trust of India, a mitigation plan was implemented in the Rajaji National Park located in Uttarakhand, which has the highest recorded elephant mortality due to train hits (2001 data). These preventive measures included installation of signages and hoardings, night patrolling to alert drivers, levelling down of steep embankments to prevent trapping of the animal, sensitizing train drivers, passengers, clearing vegetation on blind turns, maintenance of water bodies and habitat management activities. According to the EFT Report, the mitigation effort adopted in Rajaji Park is a successful example for replication and is something that should be replicated in the rest of the country, if we are to protect and safeguard the elephant population for times to come.

Views: 6,908
Share this ArticleLike this article? Email it to a friend!
Email sent!