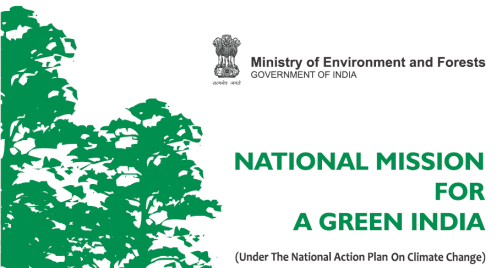 The issue of climate change is global in nature and not one person on the face of the planet is immune to it. Popularised by the World Commission on Environment & Development (WCED)’s 1987 report entitled “Our Common Future”, sustainable development is one of the first born solutions to climate change followed by several measures the world is taking up at the local level for global action. In July 2008, under the leadership of the Hon’ble Prime Minister Dr. Manmohan Singh, India brought forth its “National Action Plan on Climate Change” (NAPCC).

On October 11, 2010, the first draft of the Green India Mission, the sixth out of the eight priority national missions was submitted to the Prime Minister’s Council on climate change. This eight priority national missions are the central focus of the NAPCC, for sustaining India’s growth and development. While calling for contributions from all sectors, the NAPCC had in particular cautioned that the forestry sector will be very climate-sensitive and planning for its protection may pose a major threat to livelihoods of people in general, and forest dependent communities in particular. Hence, responding to the sensitivity of this sector, the Ministry of Environment and Forests (MoEF), along with partner organisations, has worked out a plan that puts greening in the context of climate adaptation and mitigation. The objectives of this are as follows:

On the release of the draft, Union Minister for Environment and Forests (I/c), Mr. Jairam Ramesh said “I believe this mission document envisages an approach that is innovative in several ways”. Emphasising on his mission to succeed he said that firstly it proposes a fundamental shift in mindset–from our traditional focus of merely increasing the quantity of our forest cover–towards increasing the quality of our forest cover and improving provision of ecosystem services. Secondly, the Mission proposes to take a holistic view of greening and not merely focus on plantations to meet carbon sequestration targets. There is a clear emphasis on enhancing biodiversity, restoring ecosystems and habitat diversity in the mission document.

And lastly, Mr. Ramesh said, there is a deliberate and major focus on autonomy and decentralization in the execution of the Mission’s working. The Mission will be implemented through an autonomous organisational structure so as to reduce red tape and rigidity, while ensuring accountability. Local communities will be at the heart of implementation, with the Gram Sabha as the overarching institution overseeing Mission implementation at the village-level. Such an open minded approach to an issue as delicate and complex as our fragile forest ecosystem is surely an indication of positive results of the Mission’s working.

Committing to involve local people and enhancing their livelihood, a major step proposed to be taken up in the draft mission is to engage  a cadre of young “community foresters”, most of whom will be from scheduled tribes and other forest dwelling communities, to facilitate planning, implementation and monitoring of activities at the local level. The Mission will identify, research, priorities in support of the Mission’s aim and objectives. The Mission will also set up a cell under the overall guidance of MoEF to link Reducing Emissions  from Deforestation & Forest Degradation (REDD) and REDD Plus activities in the country. The Mission strategies will be implemented through a set of five Sub Missions and cross-cutting interventions.

Views: 8,420
Share this ArticleLike this article? Email it to a friend!
Email sent!