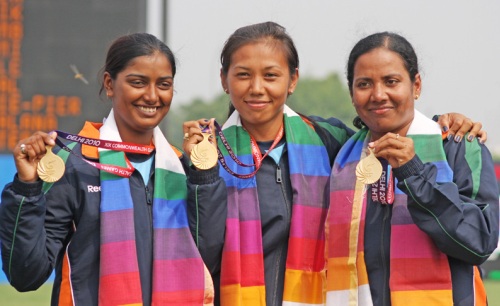 Dola Banerjee, Bombayala Devi and Deepika Kumari who brought India the Gold in Archery at the Commonwealth Games 2010 Delhi

Ever since the CWG 2010, and even before that, the media, and through it all of us, are telling and sharing the scandals that revolved around the making of these Commonwealth Games. Corruption in awarding contracts and shoddy jobs done (or not done) are being highlighted and continue to be done so for the past one week. The sad stories highlight how private gains were made at a public cost, by people in the positions of power. This is a constant and recurring theme and the as has been the case before, those in positions of power refuse to take responsibility for the shoddy job, for civil contracts and all the other work that was required to make the Games a success. Eventually, the dust will settle once the Group of Ministers finish with their enquiry, and after putting to task the main culprits, all the finger pointing would perhaps be over.

All of us are have, in one way or the other, attached ourselves to the Commonwealth Games that Delhi hosted and are pretty much involved in the outcomes. The booing of certain members of the Organizing Committee clearly showed that how there were things that hurt us that we as citizens didn’t like. But of late, ever since the Games, the only thing that we are seeing is what did not work. The impact this focus has on us is not too positive as it is making many of us depressed and resentful. Many others have begun to believe that our country has no future. And that people in power will always use it to make money. In the process, what we are missing out is what we have been able to move. Our performance in and as the CWG 2010 was brilliant.

Of all the dimensions of the Games, the two most dazzling are the cultural shows and the athletes’ performance. The cultural show, both the opening ceremony and the farewell, showed perfect coordination between the participants and was an awesome synchronized events. They were visually bright and beautify. The music was amazing. This makes the possibility of bidding for the Olympics possible. The 101 medal winners and those who worked with them is the other dimension. Not just the athletes and players but the talent scouts and coaches all need to be complemented for the brilliant performance. Of particular mention are the talent scouts who worked hard to persuade the 1×4 relay race athlete’s parents to send her for the training, or the tribal boy for shooting competition. Both of them won gold medals. The support and outreach that made men and particularly women from remote rural areas emerge winners is overwhelming.

The outcome is risen spirits,  trained volunteers, performers, some hundreds and thousands of people and their now built capacity to do specific jobs efficiently and much more.  Commitment to the Games shown by the hundreds of thousands only need to be harnessed after the Games are now over, leaving them with more experience. The gain is human capital: skills and capacity especially when that is something in short supply the world over. It is time for magical possibilities opening up for us as Indians in the future.

Views: 10,788
Share this ArticleLike this article? Email it to a friend!
Email sent!