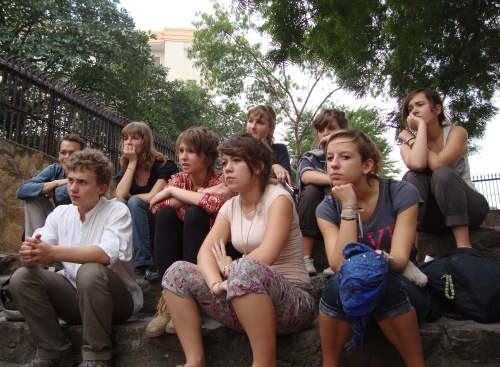 “Yahan par kya hai?” (Why do you want to get down here?), is how the auto rickshaw driver reacted when I asked him to drop me in the middle of the somewhat deserted Hailley Road near Connaught Place. “Baoli, a step well”, I told him and he had to come out all the way up to the centuries old structure to believe me for real. Shocked and surprised at the marvelous sight amidst the concrete of CP, he returned to his auto though recovered quickly to take the entire fare that showed up on the meter! Agrasen Ki Baoli, one of the eco-spots of the Delhi Greens Urban Ecotourism Project, and a lesson from Delhi’s environmental history is known to have this affect on people. 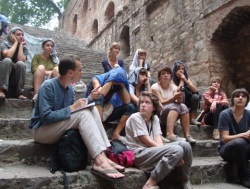 We chose this site for a meeting requested by over a dozen french students, for an interactive session on energy and environment. The students, led by their teacher Yann Forestier, were here in India to study energy issues across the country as part of their Oorja Project. Amazed by the heritage and the ancient architecture in the heart of Delhi, the students’ inquisitiveness to know the details of the ‘baoli’ structure grew as they came to know that it is a ‘step-well’ for accessing water. To answer their query the Delhi Greens team illustratively explained them about the rich heritage of Delhi, the capital of India and one of the most majestic cities of all times. And how it has  now turned into a mega-city, forgetting some structures, leaving behind others.

Water was been traditionally harvested in a number of ways in Delhi to support the ever growing population. After witnessing the step-well in the middle of the city, the very first question that came to all the students’ mind was the importance of such a structure back then and in the present day. The students were sensitized about the crucial role played by such baolis in providing water, playing as a common meeting place for the then society, in recharging the ground water and most importantly in keeping our rivers clean. They were told how people living in city are losing touch with the heritage they have inherited and over time such structures of ecological importance are being ignored. The water-energy-climate change connection was also elaborated by the DG team.

The students then came to the issue that brought them to India and to Delhi and asked their questions concerning India’s energy policy, the shift to the nuclear which was perhaps a reason that ‘fueled’ the Obama trip and on the opposition to nuclear energy usage in the country. The discussion was a mutually leaning experience as the dependence of France on nuclear as the main source of energy was felt concerning by the DG team. The issue of the waste generated by nuclear energy usage then came up and thus questioned the very sustainability of using nuclear as a source of energy. Nuclear energy may perhaps be a lesser of the few evils, but that does not mean that we stop exploring renewable options now being put in place. This is the feedback DG gave to the students who would hopefully think ‘green’ before anything else, when understanding and presenting their report on the energy status and options for India.

Views: 12,314
Share this ArticleLike this article? Email it to a friend!
Email sent!