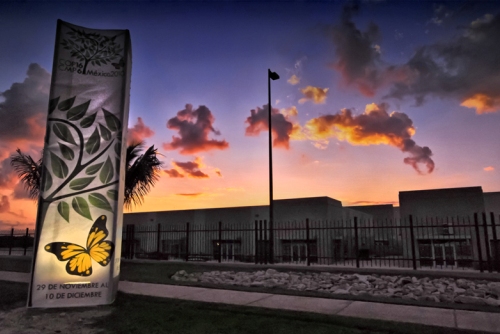 COP16/CMP6, the 16th edition of Conference of the Parties (COP) of the United Nations Framework Convention on Climate Change (UNFCCC) and the 6th Conference of the Parties serving as the meeting of the Parties to the Kyoto Protocol (CMP) began yesterday in the beautiful town of Cancun in Mexico. “Parties” refers to all the countries who signed and ratified the international treaties regarding international cooperation against climate change. The UNFCCC has been signed by 194 countries and the Kyoto Protocol has been ratified by 184 State Parties. In accordance with Article 7 of the Convention, the COP has the mandate of adopting the necessary decisions for the promotion of its effective application. The COP in Cancun, Mexico began yesterday and is scheduled to conclude on 10 December 2010. The conference also comprises the:

The focus of COP16 is a two-track negotiating process aiming to enhance long-term international climate change cooperation under the Convention and the Kyoto Protocol. The original deadline for completing these negotiations was COP15 at Copenhagen last year, but as many issues remained outstanding, the mandates of the above two AWGs were extended until Cancun where they are expected to report their respective outcomes to COP 16 and COP/MOP 6.

Irrespective of what happens at international negotiations, India should address the growing challenges arising out of a changing climate, within the domestic sphere. There is an urgent need to enact specific laws which is aimed at mitigating climate change. India should enact laws like those of ‘Climate Change and Sustainable Energy Act, 2006’ and the ‘Climate Change Act 2008’ which has been enacted in the United Kingdom, to create a statutory framework to reduce GHGs and other emissions. India also needs to deploy resources towards augmenting domestic research capacity, so that the impacts of climate change in different sectors can be gauged properly.

Presently there is no real conclusive research on the impacts of climate change in the country. There is also a requirement to put resources in universities and for climate related research, which could promote greater awareness, involvement, constructing behavioral preferences and ultimately to the interest in building institutions of advanced climate research. A lot needs to be done by India to combat the problem of climate change. Though the judiciary in India has been very proactive in protecting the environment and in acknowledging the problem of climate change, still a lot has to be done with reference to enacting different laws and policies in order to effectively address climate change. The steps which have been suggested above could be one of the means of combating climate change within the domestic sphere.

The international response to climate change has so far been very inadequate. There is little hope that something concrete would come out of COP16. With climate change creating devastating impacts all over the world, there is an urgent need to address climate change not only at the domestic level, but also at the international level. The Copenhagen Summit, which was supposed to devise a comprehensive, legally binding international agreement, was a failure, and the only outcome was a ‘non-binding’ Copenhagen Accord.

The stand of the developing countries, including India, that emission rights should be allocated on a per-capita basis should be abandoned, since the stand can neither be justified from a welfare or fairness perspective. Per-capita allocations should not be the sole basis for allocating emission rights. If this stand is not abandoned, it would thwart any future international agreement, for the developed countries, especially the United States, would not be willing to be a part of the agreement. Essentially aggregate emission of a country should be taken into account while allocating emission targets. An international community needs to come up with an international agreement on climate change, without further delay, for this is the only way that the problem of climate change could be dealt with. The agreement should be comprehensive, and should provide for binding emission targets for both the industrialized-developed and developing countries.

Views: 6,802
Share this ArticleLike this article? Email it to a friend!
Email sent!