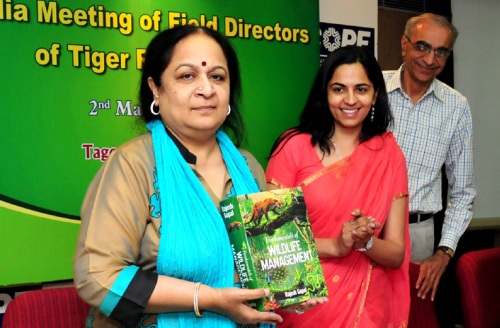 The Minister of State (Independent Charge) for Environment and Forests, Smt. Jayanthi Natarajan releasing the book ‘Fundamentals of the Wildlife Management’, at the All India Meeting of Field Directors of Tiger Reserves, in New Delhi

The All India Meeting of Field Directors of Tiger Reserves recently concluded in New Delhi, with the lauding of the efforts made by different stakeholders for protecting the tiger habitat. The Minister of State (I/C) for Environment & Forest Smt. Jayanthi Natarajan presided over the meeting and stressed upon the increased focus on the tiger conservation since the last one year. The Centrally Sponsored Project Tiger Scheme was revised in August, 2011. Its allotment has been stepped up to Rs. 1216.86 Crores, especially to support the States for securing inviolate space for tigers. Several additional components have also been included such as (i) Change in the funding pattern in respect of North Eastern States, (ii) Raising compensation for man-animal conflict to Rs. 2 lakh, (iii) Acquisition of private land for making the core/ critical tiger habitat inviolate, (iv) establishment of Tiger Safari, interpretation/awareness centres under the existing component of ‘co-existence agenda in buffer/fringe areas’, and management of such centres through the respective Panchayati Raj Institution, and (v) Re-introduction of Cheetah.

The state of Karnataka emerged as the 1st state to deploy Special Tiger Protection Force (STPS) and other states have been asked to implement the STPS in its full glory. The meeting also witnessed an award ceremony for best performance to various Tiger Reserves of the country. Smt. Natarajan highlighted that field protection continues to remain very high on the Ministry’s tiger agenda. She said,  “The states are supported in a big way to deploy local workforce for protection. Besides, we are persuading the States to raise, arm and deploy of the Special Tiger Protection Force (STPF). This needs to be expedited by the States. Despite, 100% central assistance to four States (Uttar Pradesh, Uttarakhand, Rajasthan and Orisa), the deployment of STPF has not taken place.”

The meeting also highlighted the fact, solemnly agreed by the Minister, that tiger conservation is a collective responsibility between Government of India, State Governments and Civil Society. The tiger today need support form one and all. The meeting further highlighted the need for restoring the fringe areas of tiger reserves and the need for connecting forest linkages. The Meeting also saw the release of the book ‘Fundamentals of the Wildlife Management’ written by Dr. Rajesh Gopal, APCCF & MS (NTCA).

One thought on “Tiger Conservation Efforts Awarded: More STPF to be Deployed”

Views: 5,698
Share this ArticleLike this article? Email it to a friend!
Email sent!