Deconcretisation of Trees Not Possible Without People Support 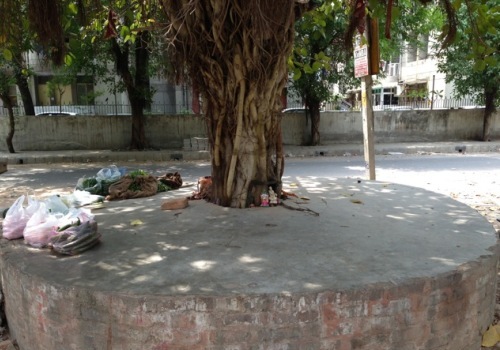 The concretisation of trees in Delhi has been an ongoing process, not necessarily as a result of any planned strategy to damage, fell or reduce the number of trees in Delhi, but large as a callousness and ignorance of Delhiites towards the needs and rights of our tree friends. I discuss here some important reasons why concretisation as a process is on the rise in Delhi and why most of us don’t care about it.

Concretisation is a fiscal drive. It is a fact that each bit of soil is being covered in different parts of the the city, be it in the residential colonies, on the main avenues or even in institutional areas and campuses etc. One probable reason for this high rate and pace of concretisation activity is that each square feet of concretisation entails a particular charge/ rate by the MCD and/or other civic agencies involved.

Thus, with more concretisation, more money can be made by the contractor and even the agencies involved in the concretisation process. Then, there is the added pressure from the corruption that is plaguing our society today, which is also known to be manifested in this form. There are therefore several such reasons why concretisation is being promoted and implemented as a preferred task by the civic agencies.

Simply put, more area under concrete implies more money = there is cash to be made @ per square foot. It needs to be noted that in reality, chooseing the concrete way is usually very expensive and used only  at places where there is heavy vehicles movement, e.g. roads and highways. At the same time, leaving areas without concrete often requires it to be maintained with greens and trees, for which no one seems to have the consideration or the patience.

However, the above discussed concretisation by civic agencies cannot be possible unless people themselves allow concretisation of areas to take place. Unfortunately the Shakespearean tragedy is that Delhiites do not like soil! Loose soil in Delhi is understood as an unnecessary cause of dust in people’s house.

Nothing however can be far from the truth. The dust in Delhi’s air is largely a result of the desertification of Delhi, which is again a result of the cutting and felling of large number of trees. Unaware of this fact, Delhiites think or equate soil with dirt and germs and for them loose soil is also a big waste since it makes for very bad parking space.

Considering the rise in the total number of cars hitting the roads in Delhi each day (>1000), parking space has now become more sacred and private to Delhiites than even their bedrooms. People also seem to be averse of  leaves falling into their manicured gardens or polished driveways. Or at best, the trees are seen by some as blocking sunlight in the cold winters.

Most people object to leaving space around trees while concretising footpaths. The tragedy is that it seems residents do not want to walk on soil around the tree. What people in the city are not realizing is that by destroying the trees and the space needed for the trees to survive, they are destroying their future and the future of their children and grandchildren.

Delhi without trees will lead to a very poor and unhealthy environment entailing health issues. As as the proverb goes, when health is lost, everything is lost. So when there is no health, then what will the Delhi resident do with the car or its concrete parking space and driveway? A very bad choice to choose the latter then!

At the same time, government engineers seem to have no time for supervising the concretisation of footpaths while contractors do not seem it wise to leave sufficient space around the trees for water percolation. Preliminary investigation suggests that engineers hardly supervise a work after it has been completed by the contractor and all site visits are made on paper.

These challenges are enough to conclude that even as the National Green Tribunal and the Forest Department have issued directions and guidelines to all civic agencies for stopping the concretisation of trees, things will not improve on the ground without people’s participation.

It is therefore people themselves who will have to take charge, report and stop concretisation work when they see it happening in their colonies, campus or workplaces and support the drive to ensure freedom for our tree friends. On the ground action can only be ensured by such large-scale citizens participation, backed by strong legal directions, active environmental organisations and green section of the mainstream media.

Aditya N Prasad obtained his Law degree from the University of Delhi and works to use his legal skills for the protection of environment and forests.

2 thoughts on “Deconcretisation of Trees Not Possible Without People Support”

Views: 10,777
Share this ArticleLike this article? Email it to a friend!
Email sent!