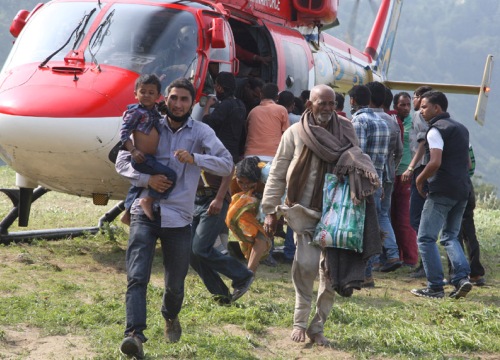 The past few days have been the most devastating and the most dreadful days for the state of Uttarakhand. The state which is otherwise popular for its scenic beauty and pilgrimage, has been washed away with Nature’s fury. What is left behind is completely shattered. Recent flash floods in Kedarnath and in rest of the Gadhwal region of Uttarakhand have not only created havoc but have also resulted in a disaster of an intensity which one cannot think of. Torrential downpour accompanied with landslide has transformed a usually serene area into a powerful river of death within minutes. All those who were are caught unprepared amidst the power and velocity of the flash floods could not survive the catastrophe. The magnitude of the disaster is told to such that villages, people, animals were all washed away in seconds. Those who were lucky enough to survive remained stranded. The largely man made disaster claimed lives of thousands of people, many local villagers and washed away communities of people and livestock.

Uttarakhand is often referred to as the “Land of the Gods” and  most of the northern part of the state is covered with high Himalayan peaks and glaciers. The state is well known for the four dhams which are  Hindu pilgrimage centers. The Sikh shrine of Hemkunt Sahib is also located in the state. In the name of ‘development’, the obnoxious and absurd steps and activities which have been taking place, without considering environment, are the major reasons for high magnitude of this disaster. The major hydro-projects on River Ganga and prevalence of illegal sand mafia has resulted into deforestation of the mountains making them prone to landslides.  To add to the problem, the tourism industry is blooming in the state in a completely unsustainable manner, involving constructions of hotels along the river beds in the floodplain area.The concept of ecotourism has not been given any emphasis while developing the tourism potential of Uttarakhand.

The lack of any proper disaster management authority or plans has been proven without doubt during the last few days in the state.  The rescue of stranded people is not being done in an efficient manner. Without the defense service personnel, it would not have neither been possible. However, it is not the job of these personnel to engage in disaster management, at least definitely not without having a functional disaster management authority in place. Consequently,  basic amenities are not being provided to the stranded people who are facing hunger and thirst crisis state which is even claiming their lives.

It is a well known fact that Nature knows how to maintain its balance even though the human race continues to believe it can overpower and destroy it. Sadhus like Nigmanandji have given up their life protesting against sand mafia, but no one cared about them or the issues plaguing River Ganga. Nigmanandji died after fasting for 115 days urging the authorities to stop sand mining mafia from destroying the river floodplain. Now, the river has made its own way. It is a wake up call for all of us to understand the ecological significance of rivers, floodplains and the Himalayas and try to develop in harmony with this dynamic interaction. Otherwise, Nature will constantly strive to maintain its balance and human societies will have to bear and accept the consequences.

It is said about history that it repeats itself. The Kedarnath shrine is believed to have been as lonely and quiet 50 years ago as it is today. Today, it has regained its position. Corruption, deforestation, unsustainable development, illegal encroachment and the way rampant commercialisation of mountain and hilly area is taking place was always a recipe of a man-made horrific disaster of such a magnitude. The destruction of Eco-sensitive zones in the Himalayas will only result in further intensification of such disasters. The consequence of disturbing and polluting the Himalayan environment would always result in such a catastrophe. This is a very sad fact but one that is nearest to the truth!

Views: 29,433
Share this ArticleLike this article? Email it to a friend!
Email sent!